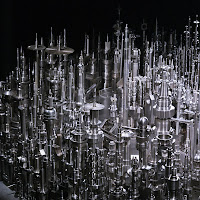 The first world of the Alpheus system to be settled, this Imperial world is a hub of activity for the expansion of the Emperor's glory. Five hundred years ago, the Alpheusians were a developing religious culture that were purged of heresy at the cost of 80% of their population. Those left saw the light and declared for the Empire. The world was garrisoned for strategic importance and mineral-rich asteroids around it were mined to construct ships for a fleet - a work which still proceeds to this day.

Alpheus Primus was a popular destination for Imperium citizens looking to escape scandals from other sectors - their arrival on a planet where love of the Emperor was so manifest helped bring them back into orthodoxy while the remaining Alpheusians had the chance to learn from those whose faith had been tested. The results were integration of both groups into a coherent group and while loyalty is tested, the citizens of this planet show a clear awareness of Imperial culture found only on other Imperial home worlds.

The planet's current governor is Pater-Governor Danniel Harz, an Ecclesiarch from Holy Terra sent to oversee assimilation. Despite whispers of Harz being out-of-favour with the Ecclesiarchy, his Terran origin, the fact he doubled Imperial tithes and halved reports of Recidivist activity give him a mystique to Imperial scholars. Harz has competent and diligent staff and encourages innovative use of local resources - if he is an Inquisitor, nobody living on Alpheus Primus knows it, though certain rumours about why the Ecclesiarchy will not promote him persist.

Faith in the Emperor is strong on Alpheus Primus; the Ecclesiarchy and Administratum found strong footholds among the Alpheusian clergy and assimilated those compliant with Imperial creed while converting backsliders into servitor units. Tech-priests here specialise in servitor construction and old or infirm Alpheusians often petition to be converted into servitor units to continue their service to the Emperor. Even skull servitors are respected by locals - you may be crossing the path of an ancestor loyal to the Emperor.

Assassination on Alpheus Primus is an ecumenical matter - an Imperial Assassinorum called the Black Monastery teaches fanatical devotion to the Emperor with skillful murder and it's patrons include the Pater-Governer and certain Ecclesiarchs who bear the marks of sanctioned Imperial psykers. It's alumni, called the Dark Brothers are quiet, devoted killers. Other assassins can be found among the hive dregs but these are less reliable, less devoted and much more mercenary in nature and business dealings.

Psykers on Alpheus Primus are handled swiftly and efficiently by Arbitrators and Ecclesiarchy alike, informing on nascent psykers yields a lucrative reward and the drug, Spook is outlawed on pain of death. Imperial psykers are put to work within the Administratum or Ecclesiarchy as scholars where their unique talents can assist in their work. More violent psykers are assigned to the Arbitrators as 'witch hunters' and often exert their cruel streaks against fellow psykers before sending them to the Black Ships for sanction.

Alpheus Primus has two major hive-settlements; Hive Kastor who specialises in biomechanical enhancements, electronics and servitor manufacture and Hive Polluxe, whose manufactoria create military ordnance, vehicles and chemicals including plasma cells and combat drugs like Frenzon and Stimm; it also has the Dioskurros spacedock where battlefleet vessels are built from minerals from the slowly depleting asteroid belt near Alpheus Primus. Resources are not yet a concern though the Adepts of the Administratum are working on contingency plans now.

Technological levels on Alpheus Primus are varied; nobility and their forces wield lasweapons, chainblades and carapace, Arbitrators use shock mauls, solid projectiles and riot armour or mesh while street scum use solid projectiles and gang leathers. This is not absolute, the black market in Hive Polluxe is active enough for criminals to get laspistols for a price yet these weapons are not casually used as it draws heavy Arbitrator attention. When insurrections in the hives occur, they are swiftly suppressed by Arbitrators supported by the local noble's forces.

A network of Recidivists called the Libertines are a recurring thorn - once a political resistance, now they are a decadent drug cartel targetting honest Imperial citizens. They foster corruption and vice in Imperial officials, blackmail them if they fall to temptation to expose them publically once the official cannot afford to pay. Arbitrators regularly smash Libertine cells but to date, the ringleaders are not exposed and they always have another supplier and another cell to replace those lost to Arbitration - disturbingly former Imperial citizens have appeared as Libertines.
Posted by satyre at 09:00