anatomy of an apocalypse, part one 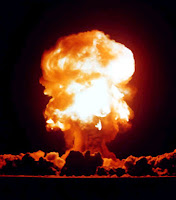 Apocalypse World.  Helluva game, as has been remarked by various people.  Having recently run a six-session game for new players, here are some setup experiences and points on the learning curve from the group (myself included).  I prefer recaps and summaries to actual play reports, some play decisions will creep in here as they reflect learning points.  The nature of the apocalypse is open-ended and this is one of the first decisions an MC needs to consider.

The rules imply certain common elements.  It's fifty or so years after the event.  Burned-out cities, a night sky of murky twilight, scarce food and water, fear and ignorance as the norm.   Society is broken down gangs cleave to personalities or holdings.  No Internet, working electronics are precious, bullets and fuel are still plentiful.  Cultural identity is annihilated, names have lost meaning.  In the ruins gifted individuals survive and bond.  The psychic maelstrom whispers secrets and lies to the strange and desperate.  High technology enhances psychic abilities yet little working infrastructure remains.

Choose your own damn catastrophe

The book refers to burn-flats, suggesting to me nuclear exchange.  You may prefer asteroid strikes, runaway virus, esoteric rapture or alien invasion.  Knowing how things got so bad means backtracking to identify the nature of the catastrophe.  The vast majority of characters won't have been around when it happened.  And if someone wants to play a grizzled bad ass, one question you must ask is "How did you escape the apocalypse?"  Open questions are key to a good game.

The footprints of the disaster are useful.  They help identify threats, give context to fronts and flavour for moves against the player characters.  Crossing a burn-flat, irradiated water, decontamination rituals by cultists and packs of mutants are fair game.  Fleshing everything out isn't desirable but a cheat sheet of ideas will help with session prep.  As MC, you'll have questions to answer yourself.  In the first session (and after), players will provide plenty of ideas.  Incorporating them into the game makes for a better game and gives them investment into the game too.

Deciding what the hell happened.

I thought about The World Before.  Like our world but with brainers armed with high-tech - a setting worth investigation.  With the number of cities and megacities, the body count would be immense, a cull of humanity.  Research on this topic and sites mapping a nuclear explosion on Google Maps gives you a point of reference.  To reduce the population to those levels might need a nuke in every city with a population over, say, 1 million... roughly 500 cities.  So where do you find 500 nukes?  Not as hard as it sounds.

A simultaneous nuclear strike in every major city would shake the pillars of civilisation without worldwide annihilation of life.  These surgical strikes would prevent other nations taking control until nuclear winter sets in. The initial destruction and the following consequences are sobering reading.  Reading around the TTAPS study and supplementary research, I chose 340 kiloton devices.  Seeing the words cull of humanity in my notes, suddenly a conspiracy trying to control world population who get it horribly wrong appears - motive and method.  Now to work out the opportunity and events from The World Before to The World After...

Civilian complacency is rewarded by rolling blackouts and hastily-invoked contingencies.  Those who can flee, those who can't either barricade themselves in or riot in the streets.  Governments reassert control despite collapsed markets, catastrophic damage to population centers and crippled infrastructure.  Rural communities face a 'golden horde' of looters and refugees, military units are mobilised to keep order.  In some countries, martial law is imposed.  In others there is insurrection.  Political instability, aggressive stockpiling and public dissent increases.

A manifesto is released via multiple channels, justifying the strikes as preventing an overpopulation crisis.
The conspiracy is swiftly hunted down and dismantled.  Interrogation combining conventional and psychic means reveal extensive conditioning.  Copies are adopted by fanatics and demagogues.  As the month comes to an end, radiation poisoning claims more lives.  Economic negotiations are convened and fail to rebuild the markets desperately needed to supply food to the cities.

The Decade Without Summer

Then winter bites down hard.  Stratospheric dust opaque to infra-red but not harmful ultraviolet radiation shades the Earth from sunlight.  With targets near the equator, both Northern and Southern hemispheres experience chilling weather, spoiling harvests.  Black snow and ice storms wreak havoc.  The Northern hemisphere loses sunlight through the first winter, the Southern hemisphere has overcast days with searing ultraviolet light which blinds and burns unprotected animals and humans alike.

Multiple bombs detonated in Brazil, Africa and South East Asia punch holes in the ozone layer and chill the oceans further.  Hemispheric separation of wind currents means the Northern hemisphere bears the brunt of the winter.  Spring, such as it is, is worse.  Ozone depletion increases due to reflected sunlight heating stratospheric nitrates.  Agriculture is decimated, lack of sunlight and cooler temperatures leads to widespread famine.  Deaths follow after, stories of food riots and cannibalism are suppressed by remaining governments.  The next five years, global rainfall decreases by 10%.  The winter lasts for ten long years.

After a decade, enough dust has fallen out the sky for the worst to dissipate.  Lasting temperature drops of a few degrees centigrade worldwide remain by the time the players play.  The ozone layer is damaged so UV exposure is a threat.  Food and water are scarce now and millions have died of famine.  We have another forty years to work out.  Questions about the psychic maelstrom, whether civilisation would survive the decade without summer, how things got from here to The World After still remain...
Posted by satyre at 09:00 2 comments:


The last inn on the barrens road, half a day from the nearest village or croft.  The Goat is known for frugality. Dwarf pine, scraggy juniper and blackthorn eke precarious existences in the barrens.  Harsh land does not breed wealthy watering holes.  Worse, the Goat's first landlord died violently and was dragged to the Hells for his misdeeds.  Luxurious travellers spin yarns of the Goat's miserliness and add to it's evil reputation. Bandits avoid the barrens, preferring richer pickings.

The Goat is a sprawling drywall bungalow, set in a hillside by the road.  Waist-high drywall corral half-feral pigs and skinny, black goats.  Smoke rises along the brow of the hill. The only window is shuttered and barred.  The sign is a wooden, white shield with black goat rampant chained to the roof timbers.  The land around is desolate, open country.  Wolfsong echoes in the hills and ravens announce kills.

The bungalow opens into a low-timbered hall with paired long tables and benches to sit sixteen.  Their arrangement as an aisle leads to a hearth flanked by hanging hides.  From behind these, the staff bring ale. Most food is prepared at the hearth, the remainder brought through from the hide-hidden rooms.  These are the landlord's quarters, a brewery, pantry and smokehouse.  The hall's floor is strewn with sawdust, dwarf pine needles and malting floor chaff to soak stains.  Hints of pine and burnt grain disturb dusty air soured with sweat.  Of the sixteen chairs, up to eight are occupied by poor goatherds, itinerant tinkers or travellers.

Augus, the landlord is sallow, wrinkled and hunched.  His patched smock reeks of malt, pine and woodsmoke.  His energetic hands are ever polishing, pouring or checking stock.  His bloodshot green eyes fix on distinctive details.  Augus has an extended family of six working as staff, two spinsters and four bored youths.  The family could run the Goat but Augus has insider knowledge that serves him well.  He talks to the air sometimes - and it replies.  Augus has unseen help in an imp grooming him for greater evils than running the Goat.  For now, the imp is content.  All fear Augus enraged, his eyes glow and those restless hands are versed in both knife and cudgel.

Rooms are not available here.  For two silver, you can sleep near the hearth.  On cold winter nights, the goats are ushered in as well.  On these nights some guests hear the hearth sizzle and fluttering wings.  The staff will mock any sharing this insight. Guests are moved on regardless of need.  Laggards are expelled at dawn unless they buy breakfast.  Few people dare to stay a second day and night.  Nobody knows of anyone who has done so.

One of the spinsters has found love and plans to elope with her beau, a local goatherd.  Needless to say, Augus is less than pleased.  The hapless beau may find his fortunes soured, or face worse consequences, without some heroic help. 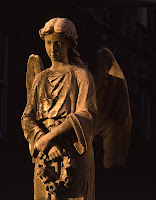 There is always a need for strange statues in a dungeon.  Don't blink.

Over at Cirsova, a food and fantasy blog carnival runs until the 21st. Food can evoke emotion and conjure sense memory.  Responses to those emotions and sense memories are typically visceral. Dietary habits for people are primarily beholden to environment and agriculture.  Culture and religion may shape this further.  There are other factors involved of course.
In some settings, there is sufficient civilisation to ensure fine fare.  Courtly food may be about theatrics as much as taste.  Serving swan to royalty is mostly ostentation.  A high-fantasy equivalent may serve dressed cockatrice to nobles.  Magical augmentation of the meal is another option.  These combinations create meals worthy of fairytale.  A truly imaginative chef may have opportunities for extraplanar travel.

Other locations may have limited opportunities for the gourmet adventurer.  The dungeon expands culinary horizons out of necessity.  Roasted cave fish, select mushrooms and dwarven spirit may keep you happy (and off iron rations) for a little while until the wood runs out.  In the deeper underworld, your host might serve chilled goblin brains served in a trephinated skull.  Similar perils face those in desolate wilderness.  Arctic glaciers and burning deserts are not plentiful larders and eating sentients is an occupational hazard.

The discovery of exotic foods and drinks made fortunes.  Enterprising adventurers may find themselves in wars over spices.  If they inspired Marco Polo and Vasco de Gama to cross half the world, your lot might go some distance.  Royal charters, trading company monopolies, dragons with alternative hoards - all can provide unique adventures for characters.
Posted by satyre at 10:00 3 comments:

the joys of public domain day

Apart from being New Year's Day, with resolutions, regrets and recaps of the last year it is also Public Domain Day.  A celebration of the commons is vital in this time of litigious technologists.  Victor Hugo, author of The Hunchback of Notre Dame and Les Misérables argued passionately for the promotion of public access to works.


This is because the public good is our primary concern, and I declare this [as an author], the people’s rights come before ours.

Among those entering the public domain this year are:

The beauty of the public domain is that it offers a wealth of resource for creators to use.  It's worth taking a look to see what inspiration may be found.  The idea of detective mysteries with occultist themes and red-haired orphans in Victorian times does appeal.  Wonder what you'll find?
Posted by satyre at 00:01 No comments: