unlikely treasures 2: even still more loot for the taking 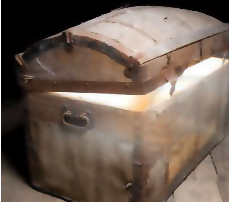 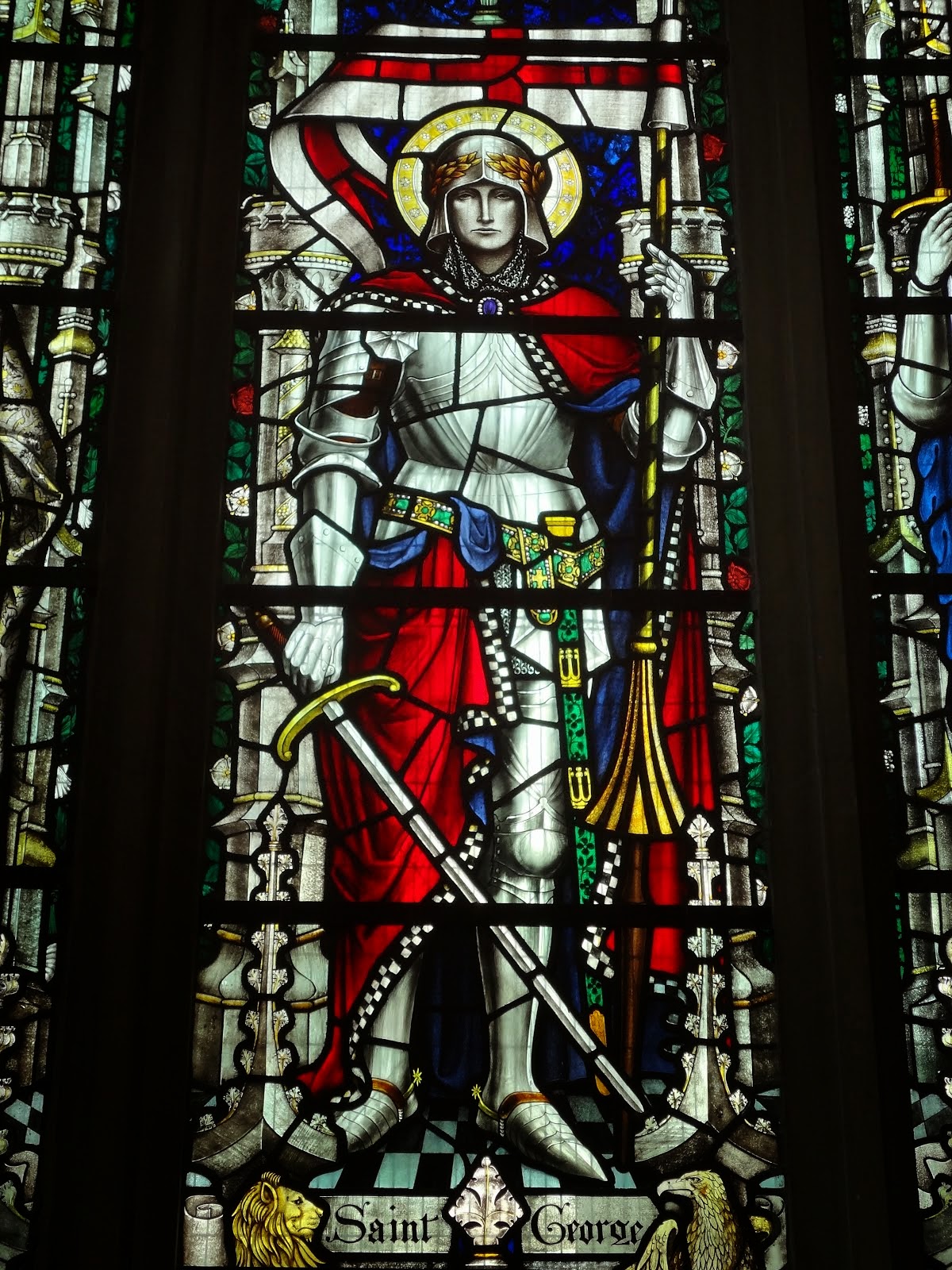 In the 3DPBMHSCBtm there are constants.  Yet even these constants diverge within each world.  The knights of Saint-George are one such. The pale warrior who watches over warriors, wanderers, herdsfolk and the diseased is beloved by many.  The knights protect labourer and noble alike.  The red cross on a field of white is known to all three worlds


Knights are lawful, good or both.  As militant servants of a divine power, they possess a peculiar mix of humility and pride.  The church organises into orders and preceptories. These work together for the greater good and to foster law and order in the land.  Knights of Saint-George are bound by a code of conduct. This code divides into two 'hands'.  Some knights contemplate their open palms when considering whether an intended action will violate their code.

The Sword-hand
1. Fear Saint-George and maintain his church
2. Loyalty
3. Generosity
4. Be noble in bearing
5. Truthfulness

The Shield-hand
6.  Respect the honour of women
7.  Protect the weak
8.  Guard the honour of fellow knights
9.  Obey those in authority
10. Never refuse the challenge of an equal

The first tenet is absolute.  Those who do not fear Saint George or allow his church to falter are dishonourable exiles.  The second tenet is reinforced by oaths of fealty. These are made to Saint-George, his knights and servants, then the local church and church-ordained ruler.  Generosity is enforced by  tithe (10% of earnings).  More is expected generally and particularly of paladins and ascetic monks (they give 90% of earnings).  Nobility in bearing combines courtesy, good posture and self-respect.  A knight always represents Saint-George - they never slouch, never whine, seeking to remain strong and composed.  Truthfulness is delivered with honesty first, compassion second.  Sometimes the hard truth is the one that people need to hear to avoid falling into self-deception.

The sixth tenet is crucial - Saint-George disdains arrogance.  No order refuses entry to women, sisterhoods are respected for deeds  as much as other orders.  The seventh tenet is a measure of efficiency.  The weak require protection as much from themselves as from the many who would oppress them.  The eighth tenet challenges hubris and keeps knights honest.  To challenge evil, one observes and resists it in the face of corruption, temptation and leniency.  The ninth tenet supports the first and second.  It teaches respect for local authority, even if such is misguided or needs to be challenged.  The tenth links to the preceding two.  A knight stands ready to justify deeds and intent to peers to ensure they are just.

In Altorr, knights are grim protectors.  With lance, sword and shield, they defy demon, giant and tyrant while driving off dire beasts and disease.  Their preceptories assign knights on periodic tours of duty. While the druids consider them as misguided fanatics, most bards welcome story fodder like the Knights.  Many nobles view the Knights as a two-edged sword.  Their willingness to fight is welcome, interfering with noble judgements and challenging 'unjust' rulers is not.

Ascetic Order of the Crimson Cross
An order of monks devoted to keeping the law.  Their hard fighting style combines strikes and blocks with training in club, dagger, spear and shortsword.  The Ascetic Order can teach riding, law (Profession (barrister)) and religion.  These monks defend the innocent in all trials, including those of combat where they must.

Order of the Black Shield
An order of knights deemed extremist among other that takes any action against evil.  Holding the fight against evil above all other considerations, they are fearsome.  They are taught religion and to understand deception.  Their vows allow divine redemption by atonement without the sting of guilt in dishonourable conduct.

Order of the Warding Cross
An order of knight protectors challenging moral decay.  They are taught diplomacy, riding and noble history as well as martial prowess and knighthood.  Aspirants are lawful good or lawful neutral.  The order is known for an additional code.

Champions of good under a burning sky: Bellotra

In Bellotra the Knights never want for action.  Crusading against demon, devil and undead, caring for the sick, maintain hospitals for the afflicted and embassies for good.  Obvious celestial affiliation led to initial distrust among Bellotrans. Over time exterminating vampire demonologists, smashing devil slave markets and quarantining plague victims softened local attitudes.  Bellotran knights outside an ascetic order wear signet rings with Saint-George's seal on the sword-hand's ringfinger.  This signifies the noble bearing they aspire to.

Ascetic Order of The Shining Hands
This order balances cleric and monk.  Bound by sacred vows of poverty, they reject arms and armour for monastic discipline and prayer.  Versed in religious thought, they wield formidable powers.  They work with other orders as bodyguards or enforcers in return for simple shelter or food.

Emissaries of the Scarlet Cross
These ordained persuade where force fails or falters.  Their talents are augmented by divine favour and secret words spoken at the creation of all worlds.  The emissary is versed in diplomacy and planar lore. Their gifts call to souls, convert the unbeliever for a time and sustain the good of heart.

Wardens of the Blooded Cross
An order sworn to slay vampires and redeem their victims.  Wardens are eclectic - those who turn undead and who were scarred by unlife are welcomed.  Quite a few wardens are ex-clerics and ex-paladins.  These hunters of the dead gain divine spells and protection against undead magics.  Their calling card is a stake with cross-carved hilt.

Watchers over giants in the earth: Carcetus

Under the stone sky, the knights of Saint-George keep vigil and light in the deep.  Preceptories are refuge from horrors and enemies.  Warriors of Saint-George are welcomed, not least because they follow orders and co-operate without additional compulsion.  Yet where Knights flourish, foes arise to meet them.  Those who lead communities know Knights are harbingers of conflict - the preceptories are never completely safe. More than one Knight has faced hostility from allies.

Guardians
Ascetic monks charged with guarding a community.  Their defensive fighting style uses evasion and blocks alongside club, dagger, shortspear, shortsword and spear.  They serve as bodyguard, sentinel and scout. They are also taught to read people and situations as well as acrobatics, climbing and stealth.

Hospitalers
Sworn to heal wounded or afflicted in their care.  Adept in battlefield medicine, they also maintain hospitals and quarantines  to protect the sick and diseased.  This does not stop them harming the foe.  Their preceptories are defended ferociously against incursions and are known for crippling traps.

Votaries
These knights keep sacred fires burning.  In Carcetus, light is life and a votary defends the sacred fires with fanatical zeal.  These pious templars are fortified against magic and harm.  Typically fighters or rangers, they favour the sword, learn of other religions and defend the fire.


Regarding the Secret Orders

Not all orders are bound to one world.  Some are well-known but few in number for ordination is arduous and their enemies are relentless.  Others are reclusive, keeping their mysteries hidden.

Crusading Order of Chalice-Bearers
These rare knights bring the good fight to the evils of the Ten Thousand Worlds.  Though many are called, few are chosen.  Aspirants (mostly paladins, clerics or rangers) are taught extensively of planes and religion and divine magic.  When ordained, they gain formidable powers against evil outsiders.

Order of Pomazal
This reclusive order of anointed knights claim sanctity of body and weapon perfect a warrior of light.  They achieve this sanctity by ordeal and sacred chrism.  Using special oils on ancestral weapons and themselves, they become formidable opponents wielding weapons of terrible power.

The dragons died to end the Demonplague and their gold was divided among the remaining survivors.  In Altorr, this story is taught to children.  In all such tales, it hides an uncomfortable truth.  Each preceptory guards one or more dragon eggs from hatching or from corruption.  Only the abbots in charge know this dire secret.  Yet tales of the Whispering Darkness, the insidious, unseen horror of Carcetus, persist despite knightly quests.  "The Darkness gnaws at the base of the cross."  Muttered by drunkards, fools and the broken who recall sibilant slanders before attacking any knights present.  This tale is not yet fully told.
Posted by satyre at 09:00 60 comments: 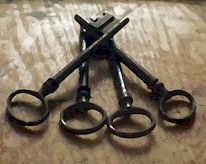 And if you thought the lock was unusual, check out the keys.  Roll d12.