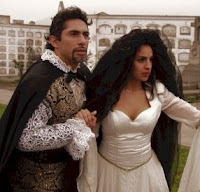 A play by Jose Zorilla performed in Spain on All Saint's Day for over 100 years, the story provides buckets of inspiration, be it the nature of the bets taken, deceiving someone, statues coming to life, a feast with an unexpected stone guest ending in a duel or a desperate, last minute plea for redemption from a rake.  This is a romanticised version of the play 'The Trickster of Seville and the Stone Guest' by de Molina, whose original plot was a moralist critique of Spanish honour as a veneer for sin which is a retelling of the legend of Don Juan or his equally notorious Italian equivalent, Don Giovanni.

A stranger enters a crowded Seville inn, wanting to learn about the exploits of a gentleman who his daughter will marry.  The landlord reveals that the gentleman and his companion will arrive shortly.  Devilish rakes Don Juan and Don Luis enter, to learn who won their bet of who seduced more women and killed more men in that year. Don Juan wins on both counts.  As Don Luis fumes, the crowd ask Don Juan if he ever fears the consequences.  Don Juan replies he only thinks of the present.  Don Luis reveals Don Juan slept with women of every social standing save two, a novice about to take holy vows and a woman engaged to be married. Coincidently, both are currently engaged to be married, Don Luis to Dona Ana and Don Juan to Dona Ines.

Luis makes a rash wager that Don Juan will not manage to seduce a woman of either kind and Juan accepts, says he will do this in a week and that Dona Ana will be the engaged woman!  Now the stranger is revealed as Don Gonzalo, the father of Dona Ines.  He declares Don Juan will never see her again and cancels the wedding.  Don Juan boasts Ines will be his, given willingly or taken by force.  With Ines taking vows, the stage is truly set.  By chance, personality, trickery and bribery, Juan manages both the seduction of Ana and abduction of Ines to his manor in one night.

He does not seduce Ines, instead both tenderly profess their love for each other.  Juan has found someone he can truly love rather than just seduce.  Yet Don Luis arrives, outraged Juan impersonated him in his seduction of Ana.  Then Don Gonzalo arrives with the town guard to accuse Juan of kidnapping and seducing Ines.  Surprisingly Don Juan pleads for the hand of Ines on his knees.  Gonzalo and Luis mock his cowardice and demand his life which pushes Juan to declare having been rejected as a good person, he will continue as the devil.  He shoots Don Gonzalo, stabs Don Luis and abandons the fatherless Dona Ines to flee the country.

Five years pass and Don Juan returns, pardoned for his crimes.  Yet he returns to find his manor torn down and a cemetary for his victims in it's place.  Juan's father, Don Diego Tenorio disowned his son and built the cemetary for Juan's victims with his inheritance.  Lifelike statues of Gonzalo, Luis and Ines are present and the sculptor reveals Ines died of sorrow soon after she was abandoned before leaving.   Juan expresses regret and prays to Ines for forgiveness.  Her statue comes to life and reveals that Juan has a day to live, she has made a deal with God to offer her soul on behalf of Juan's.  God has declared both will be bound together so Juan must choose for both - salvation or damnation.

At this point, two of Juan's friends Avellaneda and Centellas appear.  Juan convinces himself Ana hasn't just spoken to him and in a fit of bravado heretically invites Gonzalo's statue to dine with them this eve.  During the meal, Juan blasphemes against the dead and Heaven until Gonzalo's statue walks in.  His friends pass out from fright and Gonzalo's statue intones Juan's time is running out before departing.  Avellaneda and Centellas wake up and Juan accuses them of a practical joke to mock him.  They accuse him of drugging their wine to mock them.  A duel ensues.

Now Juan is led to the graveyard by Gonzalo's ghost.  There Gonzalo's tomb opens and an almost empty hourglass is revealed.  Gonzalo explains this is Juan's life, almost ended as Centellas killed Juan in the duel and he takes Juan's arm, ready to lead him to hell.  Juan cries out, denying he is dead and reaching to heaven for mercy.  Ines appears and redeems him, both then go to heaven together.
Posted by satyre at 08:00