Review: Heroes or Villains? pack by 6d6Fireball Miniatures.
Disclaimer: These miniatures were provided by 6d6Fireball for review purposes.  Fame & Fortune is an affiliate of 6d6Fireball.com (check the Affiliates box under the RPG Bloggers Network button for details).
Metric:  Have to go with fireballs.  One bad, five awesome.

Metal miniatures are a binary proposition - either a must-have or you pick them up on the fly while waiting for your FLGS to re-order Pathfinder.  Recent editions of D&D encourage using miniatures in tactical play and even the hoariest grognard has a small collection gleaned over years of play.  Those looking for a motley band of all-male adventuring types may get their itch scratched here. So, going from left to right... 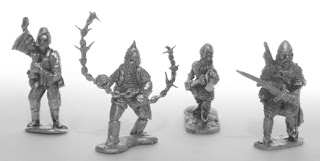 First Corvell, an aspiring wizard with a goatee beard and funny hat in wide sleeved doublet and breeches.  He raises a hand in some kind of invocation while clutching a scroll.  Detail is good with a spell-book shaped satchel and a glyph on his upraised hand.  Looks like he's stepped out of Legends of the Seeker.

Next, Drax the Chain (human fighter in chain with a spiked chain) is attacking his enemy.  As many pre-gen human fighters in WotC 3.xE supplements either uses a bastard sword or spiked chain, DMs get replayability and the level of detail is good, from the closed helm to the sagging backpack and belt pouches.

Then Kiris, Mightiest of Gnomes is clad in a brigandine jack, open-faced helm and wielding an axe in two hands.  Tall for a gnome, it shows a willowy build that differentiates him from bulky dwarves but still shows a warrior capable of hacking kobolds and goblins down.  That axe still means business though and this figure would work well in any fantasy setting.

Finally, Celebhith, a bearded ranger-type in chain with detachable sprue for his arms and longsword - he's described as a half-elf but is as tall as either of the humans here.  The slung sword and bow over his back indicate he's ready for both distance and close-up fighting. Some assembly is needed - this figure can be customised with a little care and epoxy..

Summary: 4 fireballs.
The figures are comparable quality to Ral Partha and beg to be painted.  There was some minor and easily removed (by fingernail) flash on the legs of Drax and Celebhith.  The figures are good value and as a pack of four, would make a good bundle of henchmen or NPCs. You can buy them individually if you like but the pack is good value and offers variety.