pretender to the throne

Regaining my armour is the beginning.  My banner shall fly anew and our fortunes will be restored. What was sundered can be made whole and our throne is within reach again.
-- Simkin Lanternon, exile and pretender to the throne. 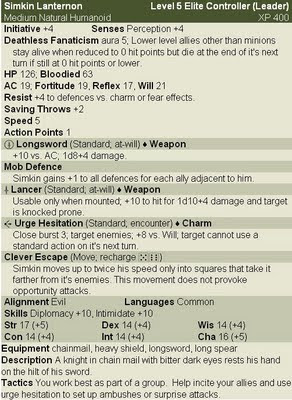 Born of a lampmaker and a disgraced lady-in-waiting Simkin Lanternon grew up in a land where noble blood assured power.  His ambition was pricked and he turned to deception.  From this Simkin learned the seeming of nobility with the blessing of his embittered mother and ambitious friends looking for a fast path to power and court.  His intellect and semblance to a former king set him on a collision course with the nobles of his homeland who spurned this newcomer and his grasping friends.

The king was newly crowned, resented by his subjects for heavy taxation and hated abroad for overthrowing the former monarch, a practice the foreign kings hoped to quash.  Lanternon travelled to their courts as a knight errant who decried the tyranny afflicting his homeland.  Nobles in exile confirmed his lineage with divinations (Simkin was a bastard of the former king's uncle) and began to groom him for greater things while Simkin bought legitimacy with his treason and flourished as he toured.

A certain king had come to possess a demon-ridden helmet that whispered dark thoughts to it's wearer, he presented it in a set of armour for Simkin. He knew Simkin would fail as he was skilled in tourney but not battle. Giving away the helmet removed a burden and left a trap for Simkin's slayer. Mnemesyx and Simkin fed off the other's incitations and the growing cruelty in Simkin was heralded as 'the will to conquer' by those courts who sheltered him and his exiled supporters.

Convinced he was ready, the exiles hired mercenaries and a seasoned captain eager for war. Simkin would lead a popular revolt and usurp the usurper.  When Simkin landed, he was joined by friends and disaffected nobles.  Mnemesyx saw it's chance and rallied the forces.  The mercenaries took a coastal town loyal to the king and ravaged it then sailed up the coast to a new attack. This attack failed as Simkin resisted Mnemesyx's influence and the resulting bad tactical decisions allowed the enemy to regroup.

Changing plan, Simkin chose to attack a town further inland at the behest of Mnemesyx. After three days of fighting, the town fell yet the conquerors were besieged as the king's general came with a greater force who slaughtered the mercenaries and punished the treasonous.  Simkin was captured alive by a knight errant who claimed his armour as a prize and ransomed Simkin to the exiles.  The exiles plot with Simkin again for the pretender is now a scheming demagogue. Mnemesyx has taught him well.

Simkin plots to steal the armour and helm from the now-titled knight who took and keeps them as trophies, being ignorant of the demon within.  He presents himself as the unfortunate victim of a melee in which he was robbed yet 'enemies at court' would see him dead were he to return home to his friends.  Once the armour is restored, he will recommence his plans for usurping the king.  This time he intends to give Mnemesyx full rein in his ambitions. Adventurers may find themselves on either side of this plot.

This post is inspired by Mnemesyx, The Twice Fallen  by Nevermet Press  and Perkin Warbeck.
Posted by satyre at 09:00