Tim at Gothridge Manor has put out an appeal for DMs to use a cyclops or two instead of using newfangled monsters.  In tribute to this (and because frankly cyclops are cool - any monster Ray Harryhausen animates is made of awesome by default) this is a special edition of weekend warrior featuring a cyclops who knows the way to do it.  It being the smashing of adventurers into pulp although there are rumours that he may have friends who may appear in their own special posts. 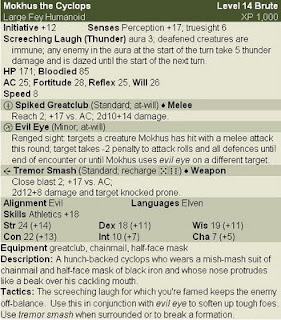 Mokhus, a cyclops crusher with added punch.
Mokhus was born under an evil star, his nose hooked and as long as a troll's, his body gnarled like the dark forests of the Feywild.  He favours a half-mask of black iron because it 'makes him look pretty' and the chainmail he's improvised is shown extravagant care.  Despite a face only a fomorian could love, the real horror is his voice, which shifts from a screech worthy of a hag to a roar that a dire bear would feel proud of.  The voice carries an echo of thunder in it, when Mokhus fights he screeches with laughter that bedevils those unfortunate enough to get close enough.  Those who stay there usually experience the spiked greatclub he calls 'Little Mokhus' and the withering power of his evil eye.

Mean and crafty with a vicious streak as broad as his shoulders, he has two default attitudes to any situation.  One is to feign stupidity and ignorance so that events are apparently nothing to do with him.  The other is violence, which he's rather good at and which he takes plenty of deliberate interest in.  This informs his methods of combat which are to feign ignorance of someone until they come close enough and then he roars with laughter and pounds them with Little Mokhus for their trouble, screeching about his attacks being the way it's done.  His cruelty is abundant and near-indiscriminate, if the opportunity presents itself, he will beat women, children and animals.

Other cyclops avoid Mokhus, knowing a bad one when they see it.  The fomorians are divided on the subject, Mokhus has been exiled from one fomorian kingdom for his disobedience and violence while other, more ambitious fomorians wonder how to court the brutish Mokhus so that his unique traits may be passed onto their warriors.  Mokhus doesn't care as long as there is food to eat, things to crush and gold to waste on food, fine company and strong drink.  His brutish sadism makes him a target for good and right-thinking folk but his sheer strength and inapproachability in melee makes him a difficult proposition.
Posted by satyre at 09:00