the breaker of machines

"It was not so long ago I got this hand... and for me,  the old saying 'You can never go home' is the truth.  Unless the idea of danger appeals to you..."
-- Adaun Ludlam, mercenary 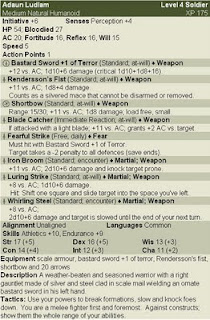 Adaun Ludlam was a retired mercenary who lived in the Vale with his brother's widow,having lost a hand for looting the wrong treasure vault. He was one of the first to accept Forgegrinder in the Vale, having fought alongside dwarves. Rendersson saw the soldier without a hand and began work.  The steel and silver hand took a month.  Adaun's friendship was repaid and he took work as a caravan guard, sending money back to his kin.

He tried to return after Rendersson had set constructs to guard the pass.  The drover was a fool and the caravan paid the price yet the constructs avoided Adaun until he attacked one.  Were it not for his warhorse and the straps on his saddle, he would have died with them.  He rode into town mauled and his horse died under him, pursued by a cloaked figure that vanished as the militia raced to him.

Adaun recovered in time and learned how to fight constructs, of Raithen's soldiers visiting the Vale and of the assassination of the warmongering king.  He fears the soldiers knew the assassin and have made the Vale their domain, using Forgegrinder's craft to help them. He believes Forgegrinder is dead for no wizard can find him.  Adaun fought inconclusively with the cloaked stalker once and has managed to stay one step ahead.  For now.

Adaun will offer his services as bodyguard or soldier to anyone travelling near the Hidden Vale.  He has a reputation among the merchants and locals as being bad luck and disliking warforged.  He knows that people who knew of his old home keep dying and now keeps quiet about where he comes from.  He knows that the Vale can last a while but he cannot face the constructs alone and offers a season's pay to those willing to help.