As promised the follow up to the Blood Tide Pirates featuring their fiendish captain and their ship. 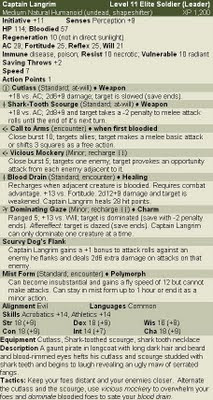 Captain Langrim
A notorious pirate captain, Langrim was "...a bad seed, even among pirates."  He would think little of wholesale slaughter once he'd got what he wanted and thought nothing of betraying prisoners so they believed they would be free only to find they were walking the plank into shark-infested waters.  Langrim became a vampire lord by drinking from an accursed chalice studded with shark's teeth.  He has kept this chalice ever since and forces those who would wish to join his crew to drink his blood from it by the light of the moon so that over time they become thralls to him.  His fangs resemble those of a shark and his teeth are also serrated; the horror of his mouth is such that 'Langrim's Grin!' is exclaimed as an oath when a pirate is deeply shocked.
Langrim prefers to attack at night; where his abilities can help him.  Like many of the more successful pirate captains he leads from the side, exhorting his pirates to pillage and plunder.  In battle he alternates between scourge and cutlass, lacking the co-ordination to use two weapons at the same time.  He usually leads with the cutlass to slow his opponent, lashes them with the scourge and repeats until he or his pirates can gain combat advantage.  At that point, the deadly flanking attacks lead to the victim usually going down under a welter of pirates as they drain them dry.
Langrim has a healthy respect for magic and for clerics and paladins in particular.  He usually insists they are the first to die in a combat unless he can find a way to parlay with them.  Then he'll try to put them off-guard by using hostages, horrific spectacles or dilemmas where the divine servant must choose between compassion or foreswearing their deity.  Langrim is known for his love of bloodshed. He rules the Blood Tide with an iron fist inside a spiked plate gauntlet, woe betide anyone who tries to defy him.

The Blood Tide
Langrim's ship is a high-sided caravel with three masts that flies a Jolly Roger stained red when she is entering battle or parlay with other pirates.  The figurehead of the ship is a maiden whose wood has been enchanted by a wizard living in Blacksands to weep bloody tears from the eyes and into the water to create a bloody wake.  This causes sharks to follow the ship (not all of them are Blood Tide pirates).  Anyone jumping overboard from the Blood Tide must move at half swim speed unless they are in shark form or risk an attack from one of the many sharks that follow the boat (+17 vs. AC for 2d6+5 damage).
Posted by satyre at 09:00