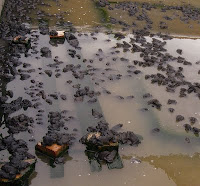 This is a location that appeared in the ill-fated Mage game mentioned in this post.  As the site was evacuated after the unscheduled re-entry of a television satellite onto the propane tanks of a nearby private compound, it's safe to release this information to a wider audience.

About 10 miles south of Sao Paolo beyond the favelas where trees and bushes shelter the roadside is a frog farm.  Out of corrugated iron and wooden buildings linked by a gravelled road, locals in bandannas, waders and stained denim net frogs from shallow pools linked by silted water channels to a perpetual chorus of cicadas.  These frogs are stored in glass tanks in a building then transported by unmarked vans. The workers are all Brazilians, many skinheads with criminal records trying to reform.

The farm manager, Jose Costa runs a tight operation.  Costa wears conservative suits, is well-groomed and never seems to perspire. He has no family and appears to be driven to helping reform criminals. The farm is profitable as it provides frogs for culinary and lab work for various interests.  It is also a money-laundering operation for smugglers linked to the kameradenetwork.  Costa has a passion for expensive cigars, cars and women and a talent for graft, motivating workers and handling corrupt officials, many of whom are 'friends'.

There are two notable exceptions to the staff.  One is Till Wastrich, the farm's engineer.  A pallid, gaunt German with lank hair, beady black eyes, wide mouth and skilled hands, he hunches inside a motorised wheelchair.  He is an electrical and mechanical prodigy who knows the farm's systems.  His voice and personality are a rusty razor wielded with merciless indifference to others, even his 'boss'.  It's hard to determine his age, his face says late fifties but his eyes make you want to add twenty years.

The other is Herman Grippel, the farm's biologist.  An obese German-Brazilian of indeterminate age with crewcut, tan skin and immaculate labcoat, his congenial nature and knowledge of firearms, medicine and toxicology make him dangerous - he plays a poker face but his eyes are a little too eager.  He keeps pet tree frogs in a tank and harvests curare for his research, sometimes leaving the poor impaled frog sweating poison as a desk ornament.   Such schoolboy cruelties amuse him no end.

Costa, Wastrich and Grippel maintain an underground lab with concrete walls, ceiling and floor sealed off by a three-inch thick steel plate with motorised counterweights.  The lab has mechanical and electronic security measures and two main areas.  One is a processing lab where batches of frogs are exsanguinated, the blood is mixed with enough ketamine to render a normal human comatose and placed in saline bags which are then taken through a steel door with a combination deadbolt lock into the processing room.

In here are six neonate vampires.  In order to prevent trouble, their limbs and eyes have been removed and they have been restrained on medical backboards with vulcanised steel ball gags and hard collars, effectively preventing them from moving their necks or speaking.  The intravenous feeds feed into the collars and the caniculae can be removed without getting within two feet of the vampire's mouth.  A trochar (a hollow steel spike with a tap used in embalming) is inserted in their hearts, paralysing them as a stake would.

The doped frog blood is fed into the vampires during daylight hours, who convert it into vitae.  Each vampire is given four pints of the mixture.  Three pints of vitae are removed from each vampire by vacumn pumps and packaged for transportation by helicopter.  The courier brings an empty vacumn-sealed and refrigerated case to transport the blood to it's intended destination.  The courier will also periodically provide them with new test subjects, transported in a locked refrigeration unit.

Costa, Grippel and Wastrich have been running this operation for eighteen years in various guises, having used animal blood and vampires to provide vitae to their masters who have instructed them explicitly on what to do and how to do it. All three are protected by the kameradenetwork and occult forces who learned a lot of necromancy during the Holocaust.  All three are motivated by the prospect of cheating death, by occasionally sampling the goods or through the ceremonies of their masters.
Posted by satyre at 09:00