The Pidonar are a fierce nation of tribes who dwell to the north of the Artorians; occasional allies yet more often rivals for land that shares a common border. Pidonar raiders attack other tribes for cattle, goods and slaves; there is a strong druidic tradition that keeps the more savage elements in check. Pidonar adorn themselves with swirling designs painted in blue and red dye. 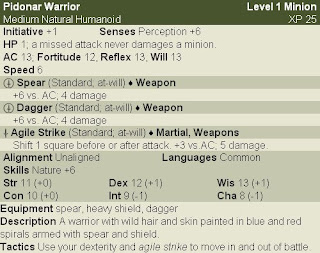 Pidonar Warrior
The Pidonar warrior (half of all Pidonar forces are made up of such) is a distrustful soul, woodscrafty and able to track their enemies. Attuned to the rhythms of nature and cycles of violence; their knowledge of such things inform their tactics and they are fond of bringing hunting skills to battle.

Though individually the Pidonar warrior offers little challenge, it's rare the Pidonar fight in single numbers (or single combat to think of it) - foes are usually confronted by a screaming horde of Pidonar who swiftly fall on their foes, dancing out of the reach of their foes as they stab them. 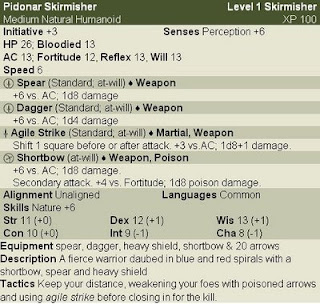 Pidonar Skirmishers
About 30% of all Pidonar forces are made up of skirmishers. Their skill with a bow is notable but not famed yet the poison on their arrowheads brewed from snakes and toads gives them a feared reputation. Much like their brethren they will bring hunting tactics to the battlefield.

The skirmishers provide missile support for their warriors using natural terrain features to provide cover, sites for ambushes, pits and deadfalls; they are keen believers in numerical superiority and attack along with their warrior clansmen in waves of troops, shooting at targets confronting them. 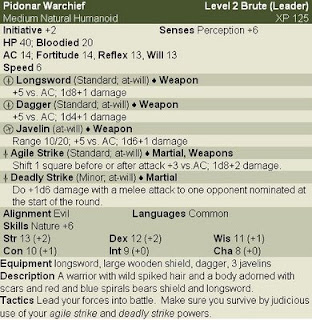 Pidonar Warchief
The warchiefs make up 20% of a Pidonar force and provide nominal leadership for the wild hordes of Pidonar who ravage their enemies. Noted for their swordplay and skill with javelin, the mobile nature of Pidonar combat becomes deadly in their hands as they specialise in telling blows.

Pidonar warchiefs are fairly democratic and will try to achieve consensus among themselves; if this is impossible then usually someone dies. They are utterly amoral and hold natural law (red in tooth and claw) as their prime objective. They are not so arbitrary as to be chaotic, yet they are evil.

Tactics are to lead the warriors and run with the skirmishers; making sure that the horde engages with the enemy and using their combat skill to finish particularly difficult foes.
Posted by satyre at 09:00