Converting historic warrior-types into D&D 4E stat blocks? Monster cards as well? Sure I can; it's past time there were some distinctive army-style troops going on. Feel free to customise these further to give each individual warrior type their own added fluff. The names of certain nations have been changed to protect the innocent (whoever that is).
Chaldyreans
An aggressive, lawful nation known for military excellence and personal arrogance; the Chaldyre pantheon is lawful, evil and militant with war deities in charge of spiritual matters. The officers of the Chaldyrians are present at roughly one in fifteen men. Cavalry when present tend to vary between light-armoured lancers to heavy elites. 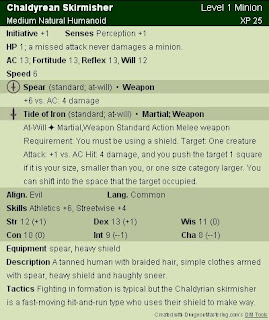 Chaldyrean Skirmisher
About 30% of a Chaldyrean force is made up of athletic youths given a heavy shield and spear as well as a sense of divine approval and encouragement of their inherent superiority over the enemy from the officers.

Those skirmishers who survive initial battles learn how to make best use of their shields to break up a formation and rely on speed and opportunism to win. Those who do not die gloriously to join the armies of their gods.

There are no old Chaldyrean skirmishers, those who survive long enough are noticed by the officers and then steered into other roles in the army 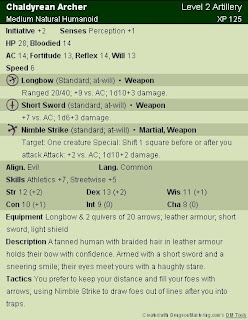 Chaldyrean Archer
The archer is the staple of Chaldyrean artillery and has a reputation for accuracy and agility. The great longbows of the Chaldyrean archers have helped even the score of dozens of battles; about 25% of a Chaldyrean force is made up of archers.

The archer is lightly armoured and has a short sword for those inevitable times when melee must be joined but in a running firefight or battle, the Chaldyrean archers hold their own against other missilers.

Like other Chaldyrean troops, they pride themselves on their athletic prowess, using this to take sniper positions on rooftops or in a tree and commanding what they view. 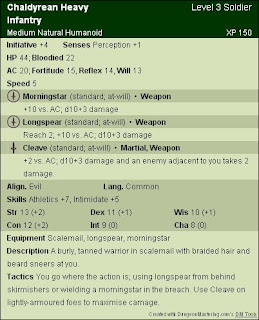 Chaldyrean Heavy Infantry
The Chaldyrean heavy infantry are feared by their foes; their armoured resilience and use of heavy weapons in brutal, cleaving attacks is a signature motif. They make up a quarter of any Chaldyrean unit.

These soldiers are confident and disciplined; forming tight pickets of longspears against cavalry, chariots and charging enemies; switching to morningstar in breach or close fighting.

Their use of group intimidation is enough to unnerve most warriors. Their athletic prowess is also notable but it is in battle that the heavy infantry are most celebrated and feared.

Heavy infantry pride themselves on their braids and their beards; even women soldiers have fake beards. 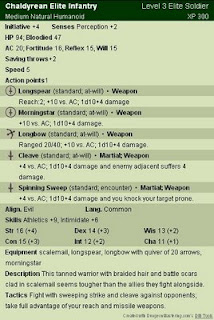 Chaldyrean Elite Infantry
The elite are feared by their enemies - not least for their exceptional attributes among the hardened forces of the heavy infantry. About five percent of any Chaldyrean force is made up of elite infantry - this steel core has a lot to do with the Chaldyrean reputation of martial prowess.

Their fierce endurance has led to many enemies claiming the Chaldyreans possess superhuman attributes for the elites and the heavy infantry share many traits; with the Chaldyrean love of war, some warriors identify closely with great heroes or even their own gods of war.

One notable difference is the use of bow by elites; this causes some alarm among the enemy when a well-placed shot hits one of their leaders. The Chaldyrean elites also enjoy fighting from the back of war chariots; driving their foes before them.
Chaldyrean elites are equal opportunists; they still have the love of braided hair and beards and often compete with each other over length and decoration. 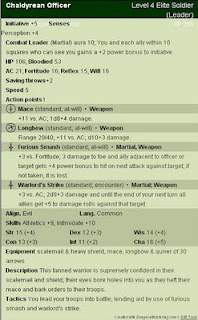 Chaldyrean Officer
Officers have notably smooth faces - in odds of the traditional Chaldyrean love of braided hair; this makes them distinct from the heavy infantry so that soldiers know who is in command. There is one officer per fifteen troops in a Chaldyrean force and it shows.

All Chaldyrean officers form disciplined lines and thickets of long-spear wielding infantry. They also enjoy riding on battle chariots to survey the effects of a battle; though they are best valued leading from the front where they can use their abilities to bolster their allies.

The officers are also skilled athletes though their ability to threaten the enemy is particularly effective when it is backed up by a knot of heavy infantry. Skilled in both martial prowess and invective, the officers are treated with reverence by the troops.

This series of posts is inspired by Phil Masters' Dungeons &... Dragoons article in White Dwarf #20. Kudos to both Asmor's Monster Math Cruncher and DungeonMastering's Monster Cards for the stat blocks.
Posted by satyre at 09:00