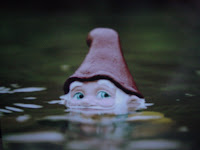 It has been noted in 4E, there is a shortage of random traps.

4E lends itself to improvised game play yet this seems a curious omission for a system that does. So what's missing? The ability to throw together traps using only the Difficulty Class and Damage By Level table, a few keywords and knowing how many xp make a successful quick & dirty skill challenge with Acrobatics, Athletics, Arcana, Dungeoneering, Perception and Thievery?

Come to think of it, it does sounds a bit 'preparation needed'. Anyway - three trap related things. Feel free to bend, fold, spindle and mutilate. And if you want to, modify them as well.

The See-Saw Floor (Level 1 Obstacle 100xp)
Trap: A 20' high triangular pivot is set at 20' along a 40' long and 20' deep pit. The pit is as wide as the corridor. Apart from the initial impact, the corridor ahead is blocked off until the floor is brought back in line with the rest of the corridor.
Perception: DC15 to notice the stonework on the floor appears a bit worn along one side and is made of a neat section of flooring material.
Trigger: Trap activates when the first five feet at either end of the see-saw has more than 10lbs weight placed on it.
Attack: Immediate Reaction. +3 vs. Reflex.
Hit: Take 2d10 falling damage and fall prone. Corridor is blocked 20' ahead by the other end of the see-saw going up.
Miss: Target ends their move action and takes no damage.
Effect: See-saw trap is revealed.
Countermeasures
Elite Upgrade (200xp): Increase the Perception & Thievery checks by +2. If the see-saw touches the ceiling crossbows with poisoned bolts fire from the squares in front of it down into the squares at the bottom of the see-saw (Range 15/30; +8 vs. AC; 1d8 damage + ongoing 5 poison damage (save ends).

Stone Block Trap (Level 7 Lurker, 300xp)
Trap: A pressure plate on the floor triggers the fall of a large stone block from above onto the area of the pressure plate. The stone block is heavy and may trap a victim under it. Once the block has been there for 10 minutes, the steel chain on top of it begins to winch it back up.
Perception: DC 24 to spot the flagstone with the pressure plate (which seems a little pushed in in comparison with the other flagstones).
Trigger: Standing on the pressure plate (which is the size of a square) pushes the block out of place and onto the victim.
Attack: Immediate. +8 vs. Reflex.
Hit: Take 2d8+5 damage and make a successful Strength check (DC19) or stop moving. Each round under the block inflicts 1d6 ongoing damage unless the strength check is made. Adjacent characters may aid the victim and get a +2 bonus by using the chain in the top of the rock..
Miss: No damage.
Event: Square with stone block and chain is considered difficult terrain until the winch at the top of the chain activates after 10 minutes and pulls the block back up (this takes a minute).
Countermeasures
Elite Upgrade: Perception DC is 26 and the block is bigger and badder, doing a close burst attack at +10 vs. Reflex on the pressure plate and any adjacent squares doing 3d10+5 damage and requiring a DC25 Strength check to move it off the victims (who still suffer 1d6 damage) under the block each round. Countermeasure checks are adjusted upwards appropriately.

Calidarn's Bestiary
Moren Calidarn was one of the luminaries among the trapsmiths of his generation (long dead now save for a handful of liches and other ne'er-do-wells) and his book is used as a primer for those who craft (and who attempt to bypass) such devices. Written in the manner of a sage's bestiary, it uses flowery language and metaphor to describe gruesome devices encountered in a dungeon or other setting.

Once a trap has been spotted with a successful Perception check, if consulted (which takes 1d6 minutes) it will give a +2 bonus to Thievery checks attempting to disable the trap. Attempting to construct one of the traps described in the Bestiary requires an Insight roll (DC20) to get past the flowery language. Costs and materials for the traps should be expensive and at DM fiat.

The book is worth 250gp to the right buyer. Certain bands of rogues may have an interest in specific copies which have been annotated by former associates.
Posted by satyre at 09:00