The Artorians are a mostly peaceful civilisation under continued invasion by expansionist foes. The nobility rule by divine right over the commoners; Artorian churches assign themselves to watch over the nobles who having instilled a basic rule of chivalry and who in return sponsor orders of holy knights to help keep the commoners safe. 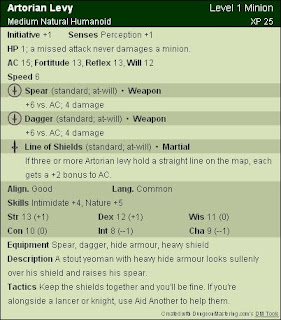 Artorian Levy
The levy is a core element of the Artorian army; 40% of any Artorian force are levy troops; good, hearty and hardworking yeomen who are ready to do their duty to their liege and who have inherited their shields from their fathers.

The levy troops know the dangers and prefer to work in shieldwalls as it provides them a measure of extra protection in battle. The Artorian shieldwall is known to it's enemies because of it's tenacity and it's support of the mounted officers and knights.

The levy are not educated, they know woodslore and they can rouse a worthy battlecry. The officers who lead them know they have limits but they are rarely tested to beyond endurance due to their knights and the superior skills of their officers. 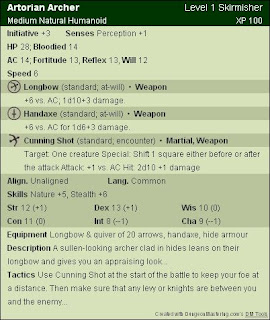 Artorian Archer
The Artorian archer supports Artorian forces; up to 30% of any Artorian force are archers. Archer morality is a lot more pragmatic than most Artorians subscribe to. However the tradition of poachers making good archers is noted even by the most idealistic and the Artorians are a practical folk first and foremost.

Artorians specialise in surprise ambushes and making the first shot count. The use of cunning shot is often taken at an advantage, the better the advantage, the more likely a devastating shot can be placed. Once this is done, the archer will pick their shots carefully but will be shooting consistently.

If pushed into melee, they will use handaxes but will seek to move back into cover so they can use their bows - which is their obvious preference. 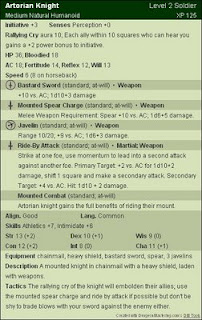 Artorian Knight
The knights which the Artorians are famed for make up 20% of any Artorian force. Their prowess in mounted combat makes them fearsome opponents, while they are not heroes in the same league of a player character, their tactics and weapons play to their strengths. They ride warhorses (Monster Manual p.159) into battle and this is taken into account in their stat block.

The typical Artorian knight is a burly yet charismatic figure used to the mounted life. Their dedication to the rule of chivalry makes them sometimes predictable - Artorian practicality is beaten into a reinforced bulwark for chivalry and they take a very dim view of any attempts to abuse knightly conduct for personal gain - yet the rallying cry of an Artorian knight will inspire allies to action.

The versatility and speed of the Artorian knight makes a fierce foe for heavier infantry - the use of javelin and spear charge can give many infantry pause yet when the swords come out, it's serious. 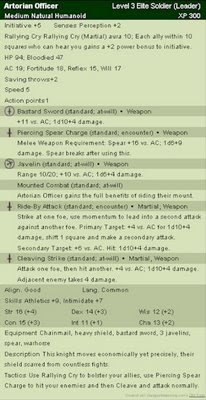 Artorian Officer
Those who lead the knights make up about 6% of any Artorian force - they are respected by the knights, feared by the archers and beloved of the levy. Their battle prowess means they lead from the front and the charge of an Artorian officer is feared by the enemy, particularly as it's usually accompanied by a number of knights trying to impress the officer.

Like the knights, officers are nearly always mounted on warhorse and play to their strengths. The piercing charge is a tactic that shatters spears yet it's devastating effectiveness is enhanced by the speed and power of the warhorse.

An Artorian officer is born to knighthood, unlike most Artorian knights who train for it. They know the rule of chivalry and it's interpretations precisely. Like the knights, they take a dim view of those who violate the rule for personal advantage but Artorian pragmatism makes the officer aware of treachery.

The only exception is if a Holy Knight is present - in which case, the officer has a fixed good-natured smile and takes out the frustration of having such a moral ally on the enemy. 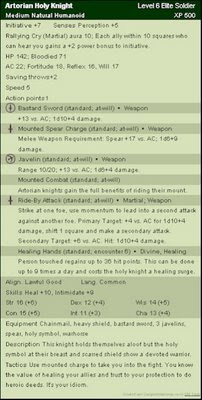 Artorian Holy Knight
The holy knights only make up 4% of any Artorian force but the presence of a holy knight is keenly felt among the Artorians who all seem to stand up a little straighter and make an effort to look smarter and appear on their best behaviour around them. Yet the affection the Artorians have for their holy knights is significant.

These are knights who have pledged service to a lawful good deity as well as to the rule of chivalry. Their donations to the poor and needy have earned them some divine favour. Yet the holy knights recognise the peril that their soldiers endure and take pains to let no death go unavenged.

The holy knights donate nine-tenths of their wealth to the orders that sponsor them who in turn provide arms, armour and steeds as well as a never-ending stream of wrongs to right. The orders also maintain orphanages, hospitals and do works of charity with noble and clerical oversight.

Holy knights are as a result, revered by most Artorian troops and inspire great heroism in the ranks. They like leading by example and like all knights, take a dim view of abuses of chivalry.
Posted by satyre at 09:00