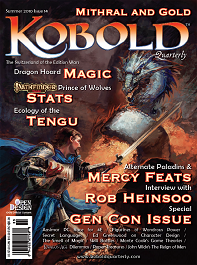 Overall (4.5 kobolds): A big issue that captures the frantic activity of convention season.  96 pages of gaming goodness, the themes of honour and generosity are mentioned not just in terms of treasure but also in the diversity of options found in the articles. Artwork is consistently good, drawing on sources other than medieval classics.  There is a good balance of adverts, as this is the GenCon issue, a slight increase is expected.  And the Critical-Hits.com advert prompted a smile - will KQ see other blog adverts?  Cartoons provided by Stan! provide levity.

DISCLAIMER: A review based on copy provided by Open Design.

Aasimar (4.5 kobolds)- Kolja Raven Liquette holds up a bright mirror to the 4E tiefling.  Born of angel and human, aasimar are zealous foes of evil.  This brings feats and a paragon path - in the limited space it has, this is a kicker of an article.

Prince of Wolves (3.5 kobolds) - James L. Sutter introduces the Pathfinder Tales novel Prince of Wolves with stats for the tiefling bodyguard Radovan, a couple of spells and magic items which will see use (especially chastisement a.k.a holy clip round the ear) for DM fans.

Ecology of the Tengu (4 kobolds) - R. William THompson provides a Pathfinder conversion for a raucous race of rogues, this draws on Oriental tropes to create a distinctive player option. While the Streetsinger is a perfect bard prestige class, the samurai swords is more in the mode of classic FGU game Bushido -  mildly jarring for those who know kenku. While it needs more ninja, travel broadens the mind.

Healing Hands (3.5 kobolds) - James Graham gives variant laying-on-hands if you're one of those DMs who find curing the pox once a week passe.  Nice if you've got the time to homebrew, plugging into an established campaign may carry it's own risks in terms of balance.

Skill Battles (4 kobolds) - Matthew J. Hanson takes the Skill Challenge.  Add an opposed roll mechanic. Profit if you have a 4E group who haven't quite got the hang of skill challenge roleplaying yet. Examples show the importance of making terrain fun.

Hoard Magic (3 kobolds) - Michael Furlanetto offers 4E magic from bling.  It relies on keyword/modular powers and implicitly trusts the PCs won't just bling up and go nuclear.  Which they will because you just greenlit that. D'oh! If you want to play a wealthy campaign setting, a nice touch but living in Vegas has it's own overheads.

Men of Honour (5 kobolds) - Variant honour codes for your honourable types.  Paladin pirates may need a specific campaign locale - the aethelring will have Viking clones nodding and the Xia code is particularly useful for those in campaigns like Wyatt Salazar's Spirits of Eden.  And the Code Duello, for those swashbucklers who do the unrequited thing.

Dice versus Story (5 kobolds) - Monte Cook waxes sage on how story can be used to bust out of plot ruts and rolling with intemperate dice when it doesn't kill the characters.  Tackling the 'take it as read' mentality is something that Monte is wise to pursue, especially when dealing with complacent players who believe the world should be handed to them because of high dice pools.

Chumming The Dungeon (4.5 kobolds) - Not cyberpunk but Jeremy Jones's interview with Rob Heinsoo. Backstage insights into 4E design, nods to Alarums & Excursions and online community as well as insights into cutting deals with your party to err on the side of awesome.

Middle-Class Magic (5 kobolds) - Adam Daigle offers a selection of minor magical items for Pathfinder courtesy of Pentrick of the Kobold Ghetto with a ton of character.  The spider grenade alone is worth the price of admission.

Book Reviews (4.5 kobolds) - A crop of fun books, looks like all of them will make the wish list.  Prince of Wolves looks fun and the Joe R. Lansdale anthology promises to be one helluva ride.

How to Create Feats (4 kobolds) - Sigfried Trent talks feat design and hacking for Pathfinder, heralding stuff for the upcoming Advanced Players Guide.  All sensible advice for the homebrewer who must roll their own.

Ancient Tongues (3.5 kobolds) - Michael Kortes has a language for any occasion in Pathfinder.  Good spice, can be over-used if you have players who love to shop for rules combos.

Courtly Games (4 kobolds) - Mario Podeschi introduces magical athletic games and if you remember Innocenti di Malapietra, this would be his bag. 4E is implied but it's adaptable.  While basilisk baiting is a dangerous spectator sport, there is plenty of fuel for some of the more demented DMs.  I can see Mad Duke's Bluff becoming a convention staple.

Moral Choices That Matter (5 kobolds) - Jeff Tidball hits this out the park. Yes it says Dragon Age.  You can use this for any game you damn well please and it will still rock.   Read The Fine Article.

The Reign of Men (5 kobolds) - John Wick & Jesse Heinig reload humanity, combining philosophic apprehension with kick-ass tactics.  Those who've been following KQ will be pleased to see the Wicked Fantasy take on races will be assembled in PDF in time for GenCon 2010.

Art & Expertise (4 kobolds) - Scott Murray takes 4E skill hacking to a logical conclusion, offering 50 ways to innovate on the basics.  Check with your local DM and ask politely at conventions. :)

Figurines of Wondrous Power (4 kobolds) - Phillip Larwood offers more toys for Pathfinder/3.x/d20.  Neat stuff and worthy additions and the figurines of fell power mean you don't just have to watch for the obsidian steed anymore.

Amber Heart (4.5 kobolds) - Tim & Eileen Connors bring a tale from the Old Margreve. This 3rd level Pathfinder scenario shows it's teeth early and often, requiring either a quick thinking party.  Will suit a party who enjoys horror and a DM willing to indulge their nasty streak. A map of the inn is on the back cover.

The Birdfolk of Zobeck (3.5 kobolds) - Wolfgang Baur gives the tengu a place in Midgard, not only in the Seven Cities but also in the distant lands of the North.

KQ has come a long way.  It will be interesting to see where Open Design take things further, certainly based on the quality of Amber Heart, Tales of the Old Margreve promises to be a must-have.  This issue, quite simply rocks.  How will they follow this one up?  Stick around and find out.
Posted by satyre at 09:00