anatomy of an apocalypse - part 2 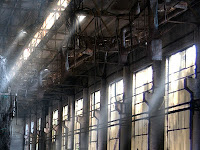 In part 1, we left things after a series of surgical nuclear strikes and civilisation reeling from ten years of nuclear winter.  Millions died in nuclear fire, millions more from fallout.  Famine claims the greatest number of victims.  Most supermarkets last nine days before food runs out in conventional situations (extreme weather or fuel shortage).  Panic buying is not uncommon.  Extreme situations yield food riots, laws against hoarding, rationing and military support of law-enforcement. Most survivalist food plans expire in five years, halfway into the decade without summer.

When the food ran out...

...all hell broke loose.  Rioting met brutal responses from armed police with military support able to fight a recognisable threat.  The more powerful civic leaders and military commissioned research regarding creation and preservation of food. Production was a top priority.  Farms had to meet intensive quotas.  Heavily guarded bio-domes and hydroponic warehouses use sunlamps to grow through the dark seasons.  This isn't the only option.  Evidence of cannibal communities is hidden by horrified civic leaders.

Symptoms of kuru and amyloidosis are identified by medics.  Despite all the death, too many mouths need feeding.  Secretive purges of individual serial cannibals and growing cannibal gangs are led by pro-establishment brainers. Yet cannibalism appears in cities and rural communities. Food caches of MREs and freeze-dried goods are treasured secrets, used only in dire need.  Shifts from increasingly scarce food stores to sustainable food supplies means tightening belts.  Horror stories of cannibal cults led by charismatic leaders become more prevalent.  Society begins a slow-motion splintering.


Listen to the voices...

The psychic maelstrom is a product of the millions of dead.  Yet pandemics claim equivalent body counts without forming a worldwide miasma of psychic energy.  And if they do, they're rarely as informative as this one.  So why are the dead so damned helpful?  Consider the gutting of a worldwide infrastructure due to the Cull's EMP and burning cities out.  Surviving engineers are kept busy.  Some rebuilding occurs and there is nothing like necessity to breed invention.

Satellites require significant investment and connectivity breaks.  Nanoscale networking is a different approach and worldwide production nodes may reconnect people.  Imagine a communicable personal nano-network linking you to the Internet.  Pre-Cull brainer tech like implant syringes or violation gloves (amplifying signal or rapid processing) makes this less of a leap.  The resulting noosphere mixed ingenuity and horror in the last two years of the Decade Without Summer.  Cryogenic stasis became a reality. Leaders of men and entourages enter bunkers to sleep away their troubles until the land is renewed again.

Blackouts again and fewer engineers means longer downtime.  The noosphere dies and panic ensues again as electronic controls fail.  Eventually the nanoscale network reboots.  Things are different, inexplicable sensory impressions, voices whispering.  This glitch births the psychic maelstrom and over forty years, it transcends it's original form.   The gifted and strange attune to it.  Information is lost, corrupted or transformed into formats man was not meant to know.  Insanity spikes among noosphere users, what seemed salvation is risky.  Those with latent psychic ability become gifted.  Nobody knows how or why.

In the wake of The Burn, civilisation finally splinters.  Famine rears it's ugly head as the farms lose power.   This time, mere anarchy prevails.  Authorities retreat or are overthrown.  Holdings form at power stations, factories, hospitals and military bases.  Mirroring declines in bee population, people abandon cities after looting them.  Those who remain carve out niches.  Cannibalism, insanity and mutation - the last from exposure to environment, radiation, pathogens or psychic maelstrom grows more prevalent.

Sustainable farming and hunter-gathering becomes the norm.  Communities disperse or form around working power sources.  The adoption of biogas from waste products and traded generators means cars can run and electrical light is possible.  Communities shrink out of necessity.  Trade in oil, petroleum and gas still occurs. Money becomes meaningless - barter now makes sense.  In time, skills are lost and memories of the world before the Cull are told to children. The omnipresent psychic maelstrom whispers equal education and confusion.  Things get a little scrambled in the re-telling.

In the absence of government or corporate interest, infrastructure decays.  Roads crack, sewer systems and flood defences are compromised.  Those with skills effect small-scale repairs. Larger problems are left to fester.  In addition, culture begins to erode.  Magazine celebrities become archetypes studied by manipulators.  Savants and operators ply their trades. Names lose meanings in the struggle to live - those who die are remembered and sometimes eaten. Fifty years after the bombs exploded, this world is bleak.