othello in the 41st millennium 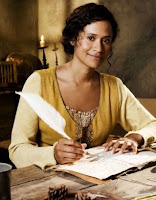 We deal in fiction.  This is hopefully obvious to everyone.  Middle-Earth, Hyborea and Melniboné are no more real now than at conception.  Arguing for authenticity in fiction is counter-productive at best, quixotic at worst.  Particularly where dragons are involved.  Is one Pakistani hobbit going to spoil immersion in a race Tolkien describes as brown-skinned?  Peter Jackson disagrees and rightly so.  The BBC's choice to cast Angel Coulby as Guinevere in Merlin acknowledges it's audience just like Shyamalan's The Last Airbender ignored theirs.  Yet black greasepaint for drow is used by fan movies and LARPers and is tolerated - something that really angers people of colour.  Most drow being villain material helps perpetuate a harmful stereotype.  Nor is this the only example.

In the Imperium (be it ancient or of the 41st millennium), humans of colour have disappeared or are worse, demonised. Dark Heresy introduced a black Inquisitor who believes he can negotiate with Warp daemons.  So the token person of colour is doomed.  Classy, huh? Compare this with a positive archetype like Dante from White Wolf's Mage: The Ascension.  Othello could easily be adapted for Dark Heresy and is in keeping with the game's themes of suspicion and deluded belief.  John Kovalic retorts to an advocate of a white-only Imperium asking if inclusion of different ethnicities is the right thing to do, why he hasn't done it yet?


As a co-founder and co-owner of Out Of The Box Games – a company we built up to multi-million dollars in annual sales in just a few years – I have direct experience with huge untapped markets and their potential. And you know what? We did it by being inclusive.

Some think Shakespeare can only be performed in the original form.  It doesn't make films like Romeo + Juliet or Ian McKellen's performance in Richard III any less entertaining or accessible.  Try telling those behind The Lion King they have to stop because they're doing Hamlet wrong.  See how far that gets.  If an author or designer makes an aesthetic, philosophical or technological decision to alienate some of their audience?  They must own that decision and - hopefully - learn from it.  It is good business sense to give positive images of different races.  So why is the industry still having difficulty with this?
Posted by satyre at 09:00