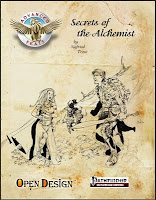 Expanding the horizons described in Pathfinder's Advanced Player's Guide comes Advanced Feats: Secrets of the Alchemist.
Metric: Bombs.  What else?
Disclaimer: This review is based on a PDF copy provided by Open Design.

Overall: 3.5 bombs.  Sigfried Trent knows the feat mechanics and how to build characters well.  Optimisers will have a field day and GMs may need to review some combos before letting them play.  The analysis and builds are good, solid stuff.  If anything, there are too many feats (odd considering the title!) and more builds would take it from good to great.  That said it's great value - I've seen sourcebooks four times bigger with less usable content.

Layout: 3 bombs.  Clean and functional.  Given the subject, the minimal artwork is unexpected - classical woodcuts of alchemists are plentiful but in all other respects, this is good quality.

Content: 4 bombs.  The analysis of the class is a good thumbnail sketch though some subtleties may escape casual reading.  The feats are many and varied. Some augment alchemist class features like Sundering Bomb, Modify Mutagen and Extra Extract while others offer bonuses suited to any class such as Fire In The Hole or Opportunity Shot.  Some feats outshine signature class features (e.g. a low-level fighter with Primeval Fury vs. a low-level barbarian) or create possible problems (a 1st-level human wizard with Craft Anywhere and Frugal Casting is a scroll factory even during an adventure) but players and crafty GMs will see options to explore.  There are absolute gems like Bottoms Up (drink potion as a move action) Hardy Brawler (non-lethal damage reduction) and the terrific Create Wondrous Creature will have some GMs (including me) rubbing hands in glee at the potential story hooks.  Other feats speed play and if you want Final Fantasy in your Pathfinder game Secrets of the Alchemist lets you wield absurdly large swords.

The builds are logical extrapolations from the core concepts of the class.  Options on races and feats are suggested.  A discussion of multi-class combinations would be a useful addition to this section and perhaps another build would have rounded things out.  That said, there's only so much room to play with.

For the price, it's a keeper and will be a popular option for players and GMs as well for those games where alchemists are found.  I expect some games will crawl with alchemists and an all-alchemist party is viable for games with gothic or steampunk trappings.
Posted by satyre at 09:00