growing the hobby: play me 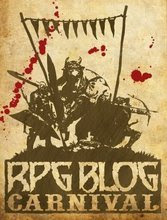 This month's RPG Carnival (courtesy of Mad Brew Labs) is about growing the hobby.  One thing Wizards of the Coast have got mostly right is D&D Encounters - where game shops host games to give a taste of what kind of fun 4th edition is.  Some FLGS understand running games help foster a community of customers - if they've got the floorspace - and in some cases they have gone even further and organised events.  Wizards have understood making the play experience easy to get into, it's unusual more companies haven't picked up on this.  Even more curious is that for conventions events can run up to 4+ hours.  This is good for a stable group, bad for encouraging the casual gamer.

Compare this with D&D Encounters which has a two-hour duration and publicity from it's business sponsor (always a smart move).  That's roughly equivalent to a football (or soccer, depending on geography) match.  The characters are pre-generated, everything is kept simple and encounters are designed to play to character strengths.  While Wizards have used Wednesdays for D&D Encounters, there are fans of 4E who can't make it then.  With at least four other days in the week, there are options for other sessions - heck, even other companies - to get a word in.  Those FLGS working seven day weeks have even more options - and if you've published, then why not support your product?

The second Read An RPG Book In Public is coming soon.  Is there mileage in a Play An RPG in Public beyond YouTube hijinks?  While I'll be participating in the Read, I'll also consider taking it further... So to wind things up, here's a couple of questions for you to comment on - as comment is free!