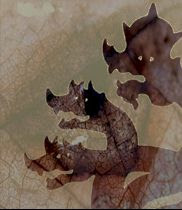 Hubert Delapore's Travelling Carnival was an obscure collection of freakish curiosities and sinister folk that toured Europe from 1876 to 1922.  For the price of a penny, patrons could view numerous natural sports, be entertained by performers and view homunculi and hinkypunks believed to be aberrations of nature.  Yet for every three fakes, at least one exhibit was very real and to the knowledgeable scholar, a troubling expression of the Mythos many would just believe as another fake.  Delapore was a troubled fellow who combined the theatricality of carnival, a keen eye for a bargain and a passing knowledge of the Mythos.  His disappearance in Paris in 1921 while visiting a local cemetery surprised few of his employees.  His carnival fragmented soon afterward.  Exhibits were sold as curios in Montmartre while most employees fled Paris to various points of the globe.

Delapore's Lantern Show was an old-style Victorian lantern show which cast shadows on a screen for the delight of viewers.  In appearance it was a complex array of mirrors built on brass armatures surrounded by a yellowed vellum screen into which flowing shapes were etched and carved. Assembling the lantern show takes 30 minutes and casts shadows onto a white surface at least 9 feet 5 inches away.  Failure to keep this distance just creates a chaotic swirl of shadows and light.  While such diversions were typically limited at best (the flickering images would repeat themselves with minor variations in most shows without the help of marionettes), Delapore's show didn't need puppets, the shadows themselves changed without prompt due in part to the random movements of the mirrors.  Delapore attributed the lantern show's design to an Arab but nobody else appeared to know much more.

Often these flickering shadows displayed scenes of a fantastical nature, slender robed and crowned figures move about, playing out an intricate courtly dance to fascinate viewers who entranced by the scene lose a Magic Point.  After half an hour's performance, the dance would change to portray the murder of one of the characters, then the dance would resume as though nothing had happened.  That night, a random member of the audience who view the murder scene inevitably died in a way hinted at by the portrayal. While the shadow-death only affected the sensitive (SAN 0/1), those making the connection between the portrayal and the following murder (an Idea roll) find it disturbing (SAN 1/1d4).  The deaths are usually by mundane means but sometimes an unlikely event will overtake someone.

The Serpent Oracle is a wizened homonculus, a shrunken (almost 3' tall) hybrid of human and serpent man with elongated face, scarlet eyes and scaled skin similar to that found in congenital ichthyosis though use of the Medicine skill will indicate that the Oracle is both genuine and not suffering from congenital ichthyosis.  Seeing the Oracle results in a SAN loss of 1/1d4.  The Oracle although wizened is kept in a half-filled tank of water to prevent hyperthermia and dehydration.  It whispers dreadful secrets to those close enough to listen to it but can only be heard if an ear is pressed to the glass.  These secrets are a mix of considerable deductive skill (the Oracle has an 80% chance of revealing an insight about someone on seeing them), nearly forty years life experience and Mythos-inspired understanding (40% skill) - if the Oracle has a name, it does not share it with it's audience.  The Oracle enjoys fine food and when allowed will seek out delicacies and wine to enjoy them - encouraging people to bring it fine food in return for a secret or two.
Posted by satyre at 08:22