return to the city built with wand and scroll 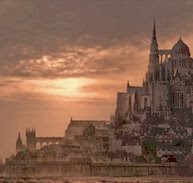 The city of we built this city with wand and scroll was built around co-existence.  Diverse spellcasters lived harmoniously for the civic good. Those without didn't object too strenuously.  Of course, real cities aren't like that.  Yet every spellcaster against the other means urban unrest. Anyone who's reined in uppity wizards knows you subcontract such work, preferably to expendable mid-level adventurers.

Once the dust settles, consider survivors.  Cities with notable spellcasters are predominantly one or two base classes with niches filled by others. Their magic is either welcomed or clandestine, few people are indifferent about fireballs in built-up areas. With like attracting like, in a city of 10,000 there’s discrete groups.

Spellcasters in charge will, by necessity, expend a share of their personal power on rulership.  In order to rule, one must wield power.  Surrounding yourself with like-minded people is a matter of survival.  From such seeds magocracies and theocracies flourish.  Both methods of rulership allow for extensive retinue so you’ll have flunkies to do other stuff.

The classic vizier occupies a half-way house between rulership and clandestine existence.  On one hand, useful authority and access to the powerful without the crown’s full weight.  On the other, limited autonomy. You can also delegate duties to the inbred cavalry.  This sits well with the morally flexible.

Clandestine spellcasters are a different matter.   Facades are built for various sensible reasons. Where magic is plentiful, this may even work.  Spellcasters usually have needs like most people.  This common touch explains goodwife witches, secretive cults, guilds of magical artisans and the foundation of churches.

Bards appear a counterintuitive choice.  Yet their high Charisma and need for audience makes them quite effective despite misgivings about artistic flakiness. Inspiring all in earshot is no mean feat.  A need to learn the words encourages literacy.   was built on military power, slave labour and inspired oratory. Not all bards are lute-toting troubadours.

Clerics are natural city founders.  Churches and temples require communities to serve or dominate.  Divine power is also useful.  By turning undead, healing the afflicted, smiting foes or sheltering others, clerics help to engender civilization. These traits help sustain cities and foster their growth.  The temple is the heart of these communities.  Clandestine churches (branded as dangerous cults by dominant faiths) may face persecution, precariously persist or secretly flourish.

Druids may tend a civilization by covert means.  Again, charisma and divine power are a potent mix.  While wilderness is preferred, sometimes you go where the work is needed and then seek sanctuary.  If a city cuckoos nature, the druid restores balance.  Green spaces, rich harvests and loved animals show druidic favour.

Sorcerors may tend cities as magical nobility or humble founders using their arcane power and charisma. Conflict tends to follow sorcerors.  This drives change and growth for cities, the largest of which are literally built on the bones of their citizens.  The bloodline may exert a powerful influence on city life in other ways. The city built by abyssal bloodlines is seldom pleasant.

Wizards are natural urban dwellers.  With arcane might, intellect and knowledge, wizards make textbook viziers or citizens of extraordinary means. Those taking up rulership wield fearful power.  Their intelligence may lead them to greatness or tragedy depending on situation and ambition.  The wizardly need for others and tendency to isolation often results in extensive bureaucracy.


Other spell casters may combine elements or add martial talents.  Specialists may lend unique flair or frightening architecture.  Towns ruled by illusionists or with a circle of arcane archers are unlikely to be 'just another stop' en route.  The presence of magic in cities makes for interesting sandboxes.
Posted by satyre at 09:00