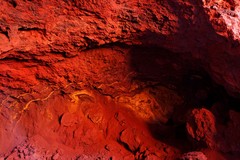 Across the Fiumorte, the weeping ditches of Chantákia combines ancient tomb, fortress and strip mine. Once an independent city, Chantákia is a decadent district. It can be reached from Bacino by ferry, barque or skiff or southern roads from Scissaxa, Lagelido and Manescor. Yellow mud, rich in limonite clings to everything. Chantákia is famed for ochre, iron, copper, gold and jewels - bloodstone, carnelian, malachite and turquoise. Many Chantákians ochre their hair red or yellow, wearing red ochre to ward against magic. Viaducts cross the ditches in a concave web of roads and fortified tollgates. Chantákia is quarried into a three-mile wide irregular bowl of ten descending ditches. with a tumulus at it's heart. Atop this, a spiral path girded by walls and trenches leads to a castle. This is home to the Hammon. This bull-masked man has an ogre's appetites and strength, demanding tribute for sacrificial pyres. Nine mail-armoured minotaurs form the Hammon's bodyguard. His will is enforced by brutal soldiers or kakonychia. These soldiers wear breastplate, bat-winged helm and clawed gauntlets wielding trident, flail and steel shields. They enforce tolls and laws in that order. Each tollgate has a firepit underneath a hollow iron bull statue. The condemned are locked inside and fires fed until the bull glows red-hot. The bulls amplify and distort screams into bellowing. On midsummer and midwinter, this reverberates across Chantákia.

The Bacino ferry docks at Eisfora, a levee at the northwest edge. Semi-domesticated rats befriend anyone sharing food. Slaves march north on the Scaladuro, a mile-long descent for assessment then sale. The guarded slave trains move slowly. The second and third tiers suffer flooded sewers and cane toad infestations from turquoise mining. Typical miners are feverish bufotenin addicts, obsequious and reeking. Under the Scaladuro has the greatest yield, though the northeast yields turquoise and malachite. The fourth tier is a quarry for yellow clay, dug out by convicts in grueling conditions. Kilns on this tier make pottery and yellow ochre. The prison lies under a viaduct and garrison so the kakonychia abuse certain convicts without reprisal. The fifth tier is a massive market. Buyers can purchase armour, books, clothing, copper ingots, leather, malachite, ochre, pots, turquoise jewellry and weapons. Mercenaries from the Avernine seek work. The sixth tier has masons, potters, sculptors and kilns. Decorative tiles, carved bricks and statues from here are raised all over the city. This industry contrasts with the decrepit seventh tier. Here fugitives lie low among cane toads, played-out turquoise beds and serpents with human faces. The eighth tier is prone to subsidence. Most buildings lie ruined and empty but armourers to the east craft mail scarves weighted with steel. These scarves are prized by warriors.

The eastern part of Chantákia is known for mineral wealth. The first tier holds slave pens and overseers. These work on the second through fifth tiers mining and smelting iron, copper and gold. Blast furnaces of red brick spit fire and forge wrought iron balls called tostomas for sale. Feral cats haunt the smelters and hunt rats. The sixth tier houses miners and a market trading in copper and gold, tostomas and gems. The seventh tier holds gemsmiths and jewelers with locked vaults guarded by traps, owlbears and minotaurs. The eighth tier has merchant villas, bankers and moneychangers. While the Hamman rules, this part of Chantákia is heard by the city. Oroguidan mercenaries and catenisti are used to maintain security.

Western Chantákia is a poor relation. The top two tiers quarry for ochre and carnelian in brutal conditions while wealth flows south and east. The third tier houses slave pens and overseer quarters in narrow, fortified houses. Rioting in the pens is commonplace. The fourth tier is home to the Dioris, a caste of astrologers, sorcerors and seers dealing in omens, oracles and divination. Clad in gold two-faced masks they are feared. The Dioris foresaw the fall of Chantákia to the city's founders and the Hammon's tribute to Manescor. The fifth tier is a necropolis. Rich mausoleums face eastward and are tended by gravediggers and professional mourners under the eastern wall. The sixth tier houses groves of fig trees. Tended by locals, these yield figs, latex and bark sold to the seventh tier. The seventh tier is a slum of dyers, tanners and weavers. Buckram, fine leathers, ochre-red line and cloth-of-gold are produced for sale. Orphans usually become apprenticed here. At the eighth tier is a coliseum. The temples of the ninth tier sponsor athletic games to keep rivalries from turning into riots. Parades to the coliseum are rowdy affairs. Streets turn out armed to 'show respect for the athletes' and perhaps to deter sectarian violence.

Southern Chantákia is part-owned by Manescor under jurisdiction of Lady Aureglas, former chatelaine of Gelusanguis. This annoys most Chantákians but Aureglas has impressed the Hamman with equally fair and cruel judgements. Aureglas and Fiammera of Animardente regularly correspond in ciphers. The first tier routes traffic maximising tolls for Lagelido while reducing them for Manescor and Scissaxa. At crossroads, markets hawk goods. Behind these, tavernas and bordellos offer services. The second to fourth tiers mine and smelt iron. Smelters make tostomas for Manescor.  Leftover goethite is made into brown ochre. The fifth tier is ceded to Aureglas as tribute after an insurrection was quelled by her agents. She lives in a palatial central villa surrounded by gifts from artists, petitioners and hangers-on. The sixth tier, Bosambages, is a ghetto for minotaurs. Their devotion to the Hammon spurs rumours of breeding with humans, profane worship and other perversions. The seventh tier has a bloodstone mine on it's western edge, worked by Hamman loyalists and slaves. Aureglas has sent agents to test their loyalty. A tenth of output is sent to Manescor as tribute. The eighth tier is known for smithies - armourer, blacksmith, finesmith and weaponsmith toil over their wares. Chantákian smiths have numerous techniques to improve goods. All valued, some need black market activity, others need bloodshed at the beginning, middle or end.

Kykliero, the ninth tier, holds monasteries, temples and preceptories. Preachers, prophets and pilgrims fill the streets. Temple rivalries are usually channeled into athletic games in the western coliseum but violent outbreaks occur. Oroguidan and Avernine mercenaries profit from occasional work here. The Hamman threatens to run bulls through the temples 'to tame them' when violence occurs. Both he and Aureglas have agents here.

The bottom basin, Gyalilofo, houses the Hamman's court. Owning the city's biggest herd, he pays handsomely for cowsheds and cowherds to keep them safe. Strange drugs and fatal venoms are brewed by alchemists at his behest to fulfill bizarre whims. Owlbear farms with breeders and trainers have become lucrative. Eggs and young are bought and sold with owlbears trained and bred for diverse violent purposes. At the heart is the tumulus and fortress. Those living here attend court three times a year. Snubbing the court and the Hamman can be fatal.