This week has seen Nevermet Press collaborate with artist Steve Austin seeks to reinstate the Krampus to his proper place by the side of St. Nicholas.  The Krampus adds more fear to the hope and fears of all the years... a laudable goal.  In honour of this noble endeavour and as a hat tip to the Merry Krampus carneval, we are entering Krampusfest! 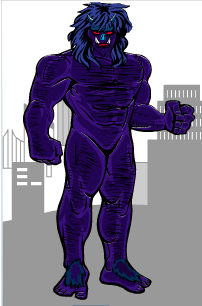 Krampus was once Ruprecht, a medieval knight transformed by ancient magics into demonic form but tamed by Saint Nicholas to punish wicked children.  Krampus appears as a horned, wingless demon with midnight-blue fur carrying a length of rope and a bag with a number of sticks (switches), lumps of coal and sacks.  The switches and coal are left for wicked children in their Christmas stockings.  Particularly vile kids are abducted and taken for a terrifying journey.  While the word on the street is that Krampus eats these abductees, this isn't true.  Some end up tied up outside churches or police stations after a harrowing journey in a sack.  Krampus is partial to fresh fruit and will, if offered it, act like the perfect gentleman.  His demonic appearance and child-abducting ways have caused more than one rooftop battle which Saint Nicholas has had to break up.
Posted by satyre at 23:07