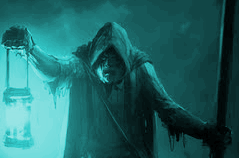 Bacino sits surrounded by swamps and the Fiumorte. The destination of the southern Black Road is guarded by a red palisade of petrified wood. The swamps discourage centaurs and raiders. Entry is barred by two fortified gates with catapult, portcullis and many scorpions firing lead bolts. The first barbican sits on the Black Road. Known as the Black Gate, it is manned by the imbonitore. Clad in leaden jackal-helm and scalemail, bearing trident, gladius and shield, they dress for business. Immediate compliance is expected, resistance meets lethal force. A toll of two silver is paid for each body entering Bacino from the Black Gate or Traitor's Gate in Parvapelve.  This morbid toll keeps with ancient traditions of burying the dead here. .

By water, access from Carnefossa, Perlanero and the Avernine converge on the shallow bay of Parvapelve. This crescent-shaped bay lies beyond the red palisade, travelling past Parvapelve's horns gets you to Bacino proper. Residents dredge for amber and lootable bodies. Parvapelve is a crumbling slum built on mass graves escaped either by wealth or death. By land, the westernmost point of Parvapelve connects to Bacino via Traitor's Gate, the other barbican. The toll is two silver per body.

Bacino proper is split into four quarters. Beyond Traitor's Gate is Banchine, a fishbone of quays backed by narrow streets shaded by warehouses and towers. Skiffs can be readily chartered from the quays, barques are rarely available for transport of goods. By contrast, skiffs travel light and fast, gliding across the Fiumorte with hooded ferrymen at the stern. Bacino ferrymen are a close community. Unlike their Avernine peers, payment means passage attacks drawing bloody reprisals from several irate persons. The harbourmaster, Jerion, understands the ferrymen. This doesn't stop him executing smugglers or being a master slaver. Links with imbonitore as a former captain help salve his poor relations with Bacino's magistrates and lord. Banchine's towers hold various patricians who built their dynasties.  Some of these now wait for death.  Others court it more liberally.

Caligregis houses the western quays. These handle shipping for the city. The central quay houses the Chantákia ferry, crossing the Fiumorte at sunrise and again at sunset. Barques for Perlanero, Carnefossa and Chantákia sail hourly. Sleek liburnas patrol for river pirates. The westernmost quays support six dromonds, privateers with Oroguidan and Avernine marines and spinati shock troops. The land around these quays is slowly sinking. Warehouses pump out water with convict-manned Riccoferran waterwheels to store goods and chattel. Quayside inns offer cheap wine and fermented fish vinegar. Alleys in Caligregis sink into the swamp. Imbonitore patrols avoid certain alleys, sometimes paid handsomely to do so by gangs working for magistrates. The heart of the sunken alleys is The Court. This decrepit plaza houses all Bacino's leprous magistrates and pale lotus beds, a potent narcotic. Their smoking staves burn lotus dust hiding their smell. Heralded by tiny bells on severe black robes, faces under leather hoods, crowds part before them. The magistrates serve to arbitrate legal disputes. Judgements are swift, cruel or expensive. Appeals are moved to the Court, petitioners risk leprosy. Most magistrates defer to Mefitico, eldest and the most venomous of a nest of treacherous vipers. The city's tradition of funeral barques for dead patricians sailing east is honoured from Caligregis. Slaves earn their freedom by crewing the barques. These have some grave-goods and usually fall foul of thieves from Parvapelve or the Avernine.

The Black Gate opens into Vallapis. Famed for it's cosmopolitan market, this district holds the House of Hounds, where imbonitore are trained. Their chief officer is Amon. Standing seven feet tall, his voice booms across the plazas. Prodigiously strong and equally skilled wielding scourge and gladius as both weapons and symbols of office. Brutal in battle and leadership, his honesty is proverbial. His leaden jackal-helm is unique, with ruby eyes, bared teeth and braided red horsehair crest. The imbonitore live Spartan existences bound by military discipline. Vallapis market sells many things, from Animardente honeyed persimmons to Oroguidan alchemical goods and Riccoferran steel. Slaves from outside the city can be bought. Imbonitore patrols in Vallapis are almost incorruptible. Magistrates are rarely summoned but when they are, flocks of them descend like rapacious legal vultures. The rest of Vallapis is residential. Merchants live in gated villas while their staff linger in damp tenements and haunt busy market taverns. Dogs are valued in Vallapis. Ratters and rat-catchers never want for work.

East of Vallapis and north of Branchine is Carcaule. This maze of shadowy alleys holds workhouses for orphans, warehouses for goods and madhouses for lunatics. Talk of lycanthropy is hushed fearfully. Imbonitore finding any incinerate them in their homes. This order comes from the lord of Bacino. Levist was crippled by rats, his tendons and muscles chewed through, his rakish good looks consumed. Wearing a stylised iron mask he crouches in a sedan chair seething with spite and malice. His tongue is rapier-quick and sharp. His bleak manse is famed for it's coliseum, where Levist indulges his love for swordplay. Gladiatorial duels happen every season. Levist owns a nearby pig farm, the swine eat the dead growing massive and vicious on them. His emblem is a rampant black boar.