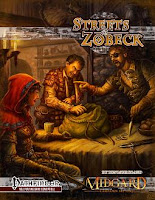 Metric: Rats on a stick! Get 'em while they're 'ot!!  Lah-verly rats on a stick for a discernin' conno-sewer!!!  Listen, when you're reviewing, sometimes you got to moonlight as a snack vendor on the Cartways.  Tough times innit?
DISCLAIMER: Based on a PDF review copy provided by Open Design
Overall: Five (count 'em!) rats on a stick.
Pathfinder GMs wanting a gritty, semi-industrialised fantasy city want for nothing here.  Seedy NPCs, nice-and-nasty locales and vignettes galore in the adventures.  The layout is good and eminently useable in game, Streets of Zobeck strikes that balance between utility and immersion that characterises a great setting book.

Contents: Five (count 'em!) rats on a stick.
There is no waiting or preamble here.  You are straight into the city by introduction to locals.  This being Zobeck, not all are human.  All have an agenda and trusting any of them has a price.
Then locations - places to purchase special wares, companionship and secrets.  Each of these have additional characters, some deserving greater expansion.  From the Cartways Black Market to The Old Stross Bath-house to the Silk Scabbard, each of these has plenty of opportunities for the kind of trouble player characters excel in getting into.
Adventures are where the book excels.  Yet more characters and the set-pieces?  Oh yes, no spoilers.  Everyone Lies is a wonderful introduction to Zobeck's gang life.  Rust follows up with urban predators (perhaps the only scenario players can be truly heroic) while the Fish and the Rose is a perilous heist.  The First Lab and Rebuilding a Good Man twine disturbing ideas together to test player nerves.  While Ripper does what it says on the tin and wears it's heart on it's sleeve, Flesh Fails is a disturbing high-level romp which wears someone else's...  A sense of continuity is achievable and GMs will be able to craft their own plot arcs around the characters in here.
Finally, it wouldn't be a Pathfinder supplement without feats, traits and magic.  The offerings provide considerable flavour and GMs looking to bolster their city watch encounters will be mighty pleased.  These can be borrowed with remarkable ease for other games.

Artwork/Layout: Four and a half (no refunds!) rats on a stick.
Pathfinder statblocks are unruly creatures at best but are corralled here with ease.  The cover art by Pat Loboyko shows a simple deal in a dingy tavern.  The interior pieces by Glen Zimmerman capture both the horror and the squalour of life on the underbelly.  Maybe a bit more colour would have made this shine but it's in keeping with the tone and a minor quibble at best.  The layout is neat, showing pervasive grubbiness and the maps are simple and comprehensible.

In conclusion, Streets of Zobeck makes an excellent argument for urban games where splitting the party is high-risk for dubious gain. Pathfinder DMs will find this book eminently useful and other game masters will find much to inspire them. Elements of steampunk and Gaimanesque fantasy (a hat tip to Messrs Corpulent and Doldrum) give the city a distinctive feel.  Ben McFarland and team (among them Richard Pett, Christina Stiles and Mike Franke).  The elements of grim and dark will give Warhammer Fantasy Role Playing fans a familiar frisson.  Paladins may find the transition to city life tricky and high-level types may stretch the fabric by their retinue but this is excellent fare and would make an excellent tent pole to base your Midgard (or other) campaign around.
Posted by satyre at 09:00