the man who brought monsters to life 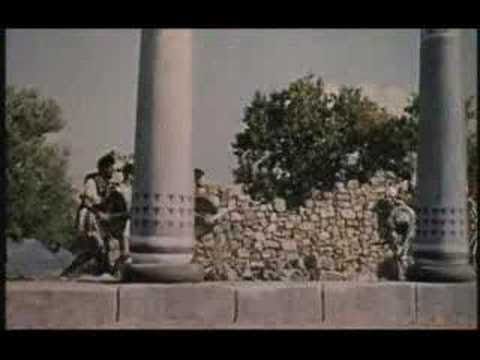 Ray Harryhausen is 90 today. His ability to create monsters that moved and interacted with actors on the silver screen had a profound impact on film makers and gamers everywhere.  His painstaking work in stop-motion animation makes his wide-ranging body of work all the more remarkable and there are numerous acknowledgements and cameos as a result. Of those great movies, three in particular appeal to me.

The Beast From 20,000 Fathoms - Harryhausen's first solo film, the story is adapted from a Ray Bradbury tale.  It features a giant dinosaur freed from Arctic ice by nuclear testing to wreak havoc on New York City.  One of the first atomic age monster movies, it's animation caused it to become a box office hit and influence on later movies like Gorgo and even Cloverfield is apparent - not just in the rampaging monster but also in the twists when conventional weapons are employed against the beast.

Jason & The Argonauts - an iconic movie, not least for the animated skeletons fighting the heroes at the end of the movie.  The statue of Talos, the harpies and the hydra were fantastic for their time and this movie is held as one of the greats of the sword-and-sandals genre.  Strangely this film wasn't a box office success yet still  became a classic and is cited by some fans as the greatest of Harryhausen's movies.

The Golden Voyage of Sinbad - The animated statue of Kali fighting Sinbad and his crew is simply awesome cinema.  With homonculi, an animated ship's figurehead, a cyclopean centaur and a griffin lend a sense of the fantastic.  And it has Tom Baker as an evil wizard who recites backwards phrases from breakfast cereal adverts whose portrayal allegedly landed him his role as the fourth incarnation of Doctor Who.
Posted by satyre at 09:00

Email ThisBlogThis!Share to TwitterShare to FacebookShare to Pinterest
Labels: fluff/inspiration