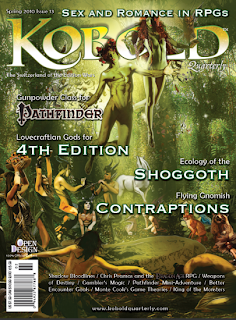 Metric: Kobolds (one bad, five awesome).
Overall: 4.5 kobolds. More entrails! The quality of the articles is consistent and while there are articles that I feel needed more oomph compared to last issue, that's a good sign since those that sing really do. Contributors have a high bar to jump and while rough edges occur, the quality is excellent.

Artwork (4 kobolds) – While the cover is green (and how!) the lettering is beginning to creep back over the art. Internal art is good, still keeping the mix of colour and monochrome art in balance and the map of the Goodwife at the back is spectacular.

Ecology of the Shoggoth (4 kobolds) – Reskinning the black pudding as the Lovecraftian icon, a monstrous ooze progenitor to aberrations and the source of a mutating drink. The most wonderful thing about this article is the neo-shoggoth. No, not a shoggoth with cool shades, flight and protection from normal missiles. Imagine a shoggoth smart enough to form T-1000 style blades and spikes! Lots of new abilities and tie-ins with Sunken Empires.

Lovecraftian Gods (3.5 kobolds) – 4E adaptation of Azathoth, Nyarlathotep and Yog-Sothoth (or Umr at-Tawil on weekends). Nyarlathotep gets the best treatment and the mask of Nyarlathotep not only gets yoinked for my planned 4E game but also a cool illustration which stands out in an article that needs  more... maybe signature NPCs?

The Arquebusier (5 kobolds) – A Pathfinder treatment by Richard Mallon for a gunner and the tools of his trade. Nice class abilities provide more than a combat emphasis for this variant fighter such as the ability to make magical ammunition. Historical firearms make this class sing and campaign notes for Golarion and Zobeck show two distinct takes as well as designer notes on how the gun can compete with the bow.

Alternate Objectives: Capture the Flag (5 kobolds) – Matthew Hanson provides an encounter structure for 4E which can be adapted to demonstrate that kill and loot are not the only options on the menu. Borrowed from first-person shooters and paintball, this structure gives players a tactical challenge and the example encounter includes a new undead minion, encounter effects and layouts.

The Thrill of the Unknown (5 kobolds) – Monte Cook examines the use of the unknown in roleplaying; if you wonder what that means, look at the old maps where it says 'Here Be Dragons'. It's no coincidence that the first ever D&D module was called 'In Search of the Unknown'. The tautology between the codified structure of RPGs and the ambiguity of stories are used to provide techniques to bring the unknown into your game.

Spark (5 kobolds) – The King of the Monsters crowned on the Kobold Quarterly website is now in residence. Pathfinder rules define this symbiotic quasi-elemental.

Scions of Shadow (4 kobolds) – This Pathfinder article contains a new sorcerous bloodline and a new school of wizardry. The bloodline has some impressive crunch and suggests all kinds of stories while the wizards are illusionist/necromancers with limited conjuration needing a DM willing to go along with the ride to get the best out of them.

The Heart of a Hero (5 kobolds) – Mario Podeschi provides sensible, thoughtful advice on running romantic subplots in RPGs without making a hash of it. The inset boxes are golden, dealing with a variety of tips from how to handle shallow characters to judicious use of the 'boot scene'. Good stuff for those who want to expand their role-playing horizons beyond combat, diplomacy and exposition of lore.

Gambler's Magic (3.5 kobolds) – A plethora of 4E magic items with a gambling theme; while some dice are nice, the tokens are... token? Some magical coins offer intriguing ideas yet I am concerned at the item levels here, aimed mostly at paragon tier, they feel overpowered for what they do despite being mechanically appropriate for items of that level. A bit of variety between tiers would have made this article a lot stronger.

Destined Weapons (4 kobolds) – A Pathfinder article with variant destiny rules for weapons that become enchanted by their actions and the enemies they have slain. There are new feats for characters to take that allow them to gain greater powers for their weapons. I can see this being homebrewed with Mike Mearls' Iron Heroes to create an epic campaign with mighty heroes wielding weapons of unimaginable power.

Gnomish Flying Contraptions (3.5 kobolds) – Mining tinker gnome nostalgia for Pathfinder, with hints of the drogue wings used by some Forgotten Realms dwarves. The items are not entirely serious and need to be played in the same freewheeling way.

New Blood... (4 kobolds) – An interview with Chris Pramas of Green Ronin. Chris reveals the simple and robust design aesthetic with games like Dragon Age, Mutants & Masterminds and the new AGE system well as some impressive taste in comics. A nice interview and Chris has plenty to say about not being afraid to get your hands dirty.

Freeport Backgrounds for Dragon Age (4 kobolds) – Two great tastes that taste great together make this article an interesting conversion and a jump-off point to convert Freeport's setting to other systems. Danilo Guida's art is simple, clean and reminiscent of Jim Holloway's art in pre-DDI Dragon. The switch in layout from two column to three columns makes the text a bit crowded and difficult to follow which is a shame because the content is solid.

Wreck of the Goodwife (5 kobolds) – Jonathan McAnulty and Brandon Hodge deliver a mass of shining ideas in this Pathfinder scenario from the Widows Watch society to the treasure table items. The full colour map also available from the KQ site made me smile – exactly how web sites support a product without having to refer to errata. If this is a taste of Sunken Empires, this will be a very desirable product.

Daughters of Perun (4 kobolds) – This article further expands the Zobeck setting by placing a nation of Amazon warrior-women and their subjects to the east of the Free City. Perunalians have a sense of Russian valkyrie about them and the Order of the White Lions makes for ready-made character backgrounds.

Editorial (5 kobolds) – Wolfgang Baur reveals the mono-gamist strain of the hobby and the pernicious snobbery that can be found in some gamer groups. A call to demonstrate that sometimes a change will do you good.

From The Mines (3.5 kobolds) – Letters is meta.  More details on Adopt-a-Soldier and praise for the evolution of Kobold Quarterly into an edition-neutral product.

Book Reviews (4 kobolds) – Another strong collection. Very intrigued by Jeff VanderMeer's Finch and the Songs of the Dying Earth anthology. Other books include modern fantasy and 1960s occult horror. The reviews are concise and positive, selling the books effectively.

Cartoons (3.5 kobolds) - Stan! hearkens to ye olde chainmail bikini and 10x10 Toon reveals the lighter side of Mythos worship. The latter is stronger and both are genuinely funny.

Advertising: About 13.5 pages (about 20%). The quality is consistent with last issue and this is encouraging – many are full page ads and even if this more than previous issues, the ads themselves seem less intrusive.

KQ has come a long way.  It now shows itself as a product that will spark a lot of ideas for games and which is comfortable with it's production values.  It's edition neutrality is a nice move and I hope contributions for other game systems will meet the high quality of it's current articles.  Worth your time.
Posted by satyre at 10:37