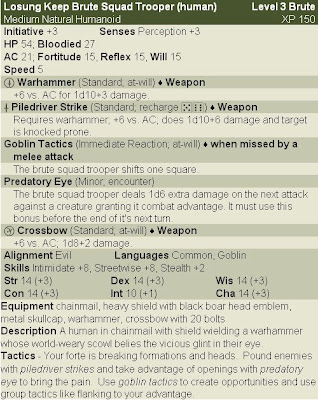 The Losung Keep Brute Squad is a mixed force of goblins and humans keeping order in Losung Keep, the largest town of the Losung Highlands.
Each member wears a chainmail coat, metal skullcap and metal shield with a black boar head emblem.
Their attitude to law-enforcement is of the 'smite first, ask questions later' school, ingrained with nearly seven years of dealing with extensive goblin gangs and desperate human brigands.  While the skull cap has led to the mocking name 'tinhead' from some of the local street children, the skullcaps have a very practical function in protecting the head from axes and attempted scalp-taking by goblin blackblades.

Unlike many city watch they attend their duties with a grim determination and bloody-minded zeal. They are disciplined and brutally pragmatic in combat, always fighting efficiently as a group. If they back down, violent deaths in alleyway ambushes and suddenly fatal brawls will be their fate. 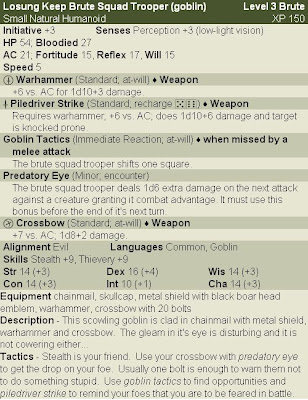 Even the goblin troopers are fierce foes, using their knack for stealth and covert activity to their advantage.  Their slightly greater skill with a crossbow makes them good snipers and their willingness to pick locks makes them effective investigators.  Yet the brute squad will group human and goblin together, despite differences in race and culture.  The resulting mixture plays to the strengths of both as troopers use goblin tactics to draw their foes out or maneouver into ideal positions and then follow up with piledriver strikes boosted by predatory eye.  If the troopers launch a surprise attack or have the advantage, the effect can be devastating, especially if three or more are bringing down a lone fugitive.
This has led to accusations of brutality by some keep residents but the brute squad's leader is unconcerned by such charges, claiming "...the brute squad are not there to mollycoddle such hardened scum as they deal with."  In a frontier town like Losung Keep, such arguments have merit and the brute squad is seen as a necessary evil by it's residents. 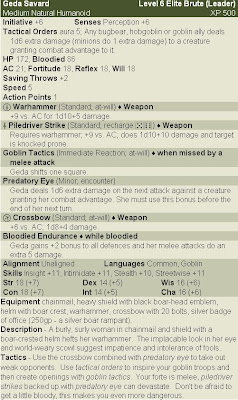 Their leader is Magistrate Geda Savard. Named the Black Boar for ferocity (and it's whispered stubbornness and looks), she encourages 'tough love' in enforcing order and escalating retribution against those harming the brute squad or herself. Living in the highlands all her life has given her a comprehensive lexicon of Goblin and goblin tactics. Funds from criminal fines and asset seizure enable the brute squad to be well-equipped and this has given them an edge in a town known for sheltering brigands and thieves. Savard's tactical savvy makes the Brute Squad fearsome in a fight and herself is no slacker in combat.
Posted by satyre at 09:00