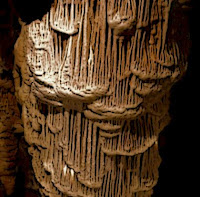 In darkness lit by phosphorescent fungi and the reflected light of fading magics on rushing water, the Darksea War continues apace.  New combatants enter the fray, drawn by compulsions woven by each side, formed out of horrific experiments or help from other worlds. Down the long years of war, aboleth and illithid have clashed over the limited resources, one seeks to drown the Underdark, the other seeks to civilise it.  Yet both seek to enslave those who remain and crush who resist their dominion.

The aboleth have been invigorated by the presence of the Elemental Chaos and Abyss that offers new allies to fight a war that for a while appeared to be siege-based and dependent on changes in water.  Now the aboleth plan an offensive based on sallies and counter-attacks hidden under the illithid.
The illithid have not been idle.  They recognise numerical superiority may not be enough and have delved into forbidden lore and experimentation to increase their superiority on land and to try and take the fight to the lake-cities where their enemies plot.The Far Realm continues to provide both sides with resources beyond rhyme or reason.  The strange nothics serve both sides, mindblights are seen roaming the shores of the lake-cities hunting thralls while illithids retain cacklers as loyal if vicious pets.  The presence of fell taints have increased in the war, posing threats to all sides and making the Underdark even stranger and deadlier.  As more abominations spawn, the Far Realm comes closer.

Both sides are threatened by the duergar; vengeful former slaves of the illithid now loyal servants of the Nine Hells who have learned from their illithid captors.  The duergar are set against both sides but will make certain the illithid suffer since they are often in direct competition with the mind flayers and more than a few grudges have been passed down through duergar tradition.  The appearance of demonic allies among the aboleth has made them a target as well yet the duergar are smarter than to fight a war on two fronts.

The neogi have also escaped servitude under the illithid and intend to avoid that fate once more.  As a result they will trade with anyone including allies from both sides.  The slave markets are visited by both drow and kuo-toa; yet the neogi keep their customers at arms length while subtly sabotaging illithid expansion by a combination of proxies, treachery and magic.  On one thing everyone agrees, the neogi cannot be trusted.
Posted by satyre at 09:00