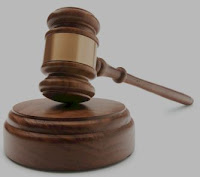 Blackfont is spoken of  among mages for whom the lure of power and knowledge exceed their morality - an entirely too prevalent breed.  It is a moving auction that specialises in 'items of interest' among mages, from Ducheski alchemical glassware to matched Regency duelling pistols to rare blues records to bloodstone jewellry.  Notably there are no telephone or computer-based bids allowed - this isn't eBay after all.

Blackfont trades out of London according to their website but the reality is global with small offices in York, Edinburgh, Chicago, San Francisco, Sao Paolo, Lisbon, Amsterdam, Oslo, Prague, Istanbul, Johannesburg, Moscow and Singapore.  It's founder Henry Blackfont was an English swordsmith and pawnbroker to law students during Queen Elizabeth I's reign.  When duelling was outlawed, Blackfont became an auction house.

Blackfont trades on a combination of competent researchers, hauteur and flair for the unusual. In particular, their skill at tracing provenance is formidable.  Fiscally, the auction house is well-heeled with a combination of old money, legal patronage and directors of diverse nationalities and remarkable wealth.  Yet Blackfont keeps to the shadows while providing research services to houses like Sotherby's.

Auctions start at 13:31 local time in sunlit locations.  Those who attend Blackfont auctions include proxies for celebrities, musicians and other artistes, academics, collectors, politicians,  aristocrats and self-professed mystics.  A few have showed up in person though paparazzi are frustrated.  Most Blackfont auctions are black tie with exceptions for those with enough wealth or influence not to care.

There are few actual wonders sold (perhaps one in thirty items, anything at Level 2 is a rare find indeed - one in 900 lots at best and nothing beyond) but items with Resonance are plentiful (one in five) and almost all have a history of at least seventy years.  Items range from whimsical (an early phonogram) to macabre (bracelets made of the teeth of Vedic gurus) to desirable (a dress worn by an iconic actress of silent movies).

The Technocracy to date have tried to disrupt sixteen different auctions and failed due to unexpected Contingency One or Five situations forcing redeployment.  One NWO administrator stated statistically they must be planned yet there is no evidence even with repeated interrogation (and memory wipe) of specific employees involved with the auction with no recorded telecommunication of any connection to Blackfont.

The rest of the Awakened treat Blackfont as a somewhat exclusive resource.  Recent times have seen vigilantes randomly attacking senior Blackfont staff and at least one vigilante was declared insane by the authorities.  This has led to more rigid enforcement of security which has antagonised some of the more flamboyant mages and collectors.
Posted by satyre at 13:31