The enigmatic Shan live in the east; their enduring and isolated dynastic empire untouched by all except Turalar raiders and hardy merchants who seek the exotic materials the Shan create (fine silks, alchemical reagents, exotic spices and delicacies). Their armies are founded on an ordered society and precise strategies delivered through the iron-clad authority of their generals and innovative use of drums and alchemical reagents for signalling and battle.

The Shan value strength and intellect; however childhood diseases ravage them and they are quite superstitious. The priests of the Shan place more value on learning than on healing to the detriment of the people; as a result the Shan are susceptible to illness and fancy. This is kept in check by the fierce authority of the generals and ministers. Shan society is founded on duty to family, nobility and those with authority and a healthy respect for history. 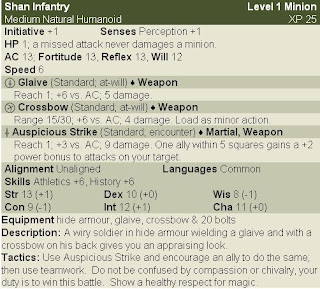 Shan Infantry
Half of all Shan forces are made up of their infantry. Trained in disciplined ranks when they are tall enough to use a glaive a mass of Shan infantry give pause to any who dare them for their skill in spotting openings leads to an auspicious strike; a devastating attack against an opponent which creates another opening.

Those who cannot engage foes with glaives use crossbows. The Shan will concentrate fire to break formations, kill missilers or controllers or the steeds of opposing cavalry. Such unchivalrous behavior are seen as tactical necessity - they leave heroics to their heroes and get on with the duty of war. 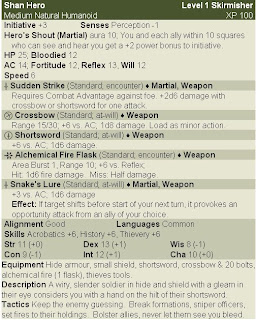 Shan Hero
About 25% of all Shan forces are made up of these plucky skirmishers, these 'righteous rogues' are not rogues as such but skilled in thievery and war - commando tactics are their forte. Their use of alchemical fire is primarily to sabotage enemy fortifications or stabling yet they are not above using it to disperse formations in battle; their skill in breaking formations and sudden strikes on enemies make them a versatile force and one not to be sneered at.

Their relative vulnerability keeps them mobile and using a strong offence; the heroes can bolster morale not only by their deeds but also by their shouts and chants which inspire allies to swift attacks of their own. They often provide crossbow support for a mass of infantry - heroes may use sudden strikes with a crossbow to target enemy officers or artillery workers in order to disable their foes and help their allies. 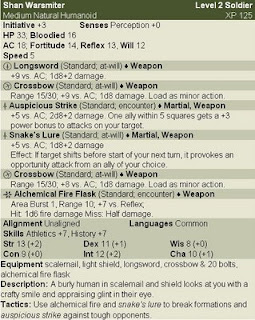 Shan Warsmiter
About 15% of a Shan force are made up of these warriors. They are deployed in pairs on war chariots to charge and shatter the ranks of enemies or trap cavalry. Warsmiters are raised from childhood, their training emphasises use of strength and longsword use so that they can perform athletic feats in full armour and wield sword and shield with considerable skill.

The heavy armour of the warsmiters make them a tough nut to crack and their skill in co-ordinated fighting makes assaulting a war chariot perilous. Their use of crossbow from chariot makes them mobile snipers despite their armour but this is not their primary function. Their use of alchemical fire to break formations makes them feared by their enemies - a popular tactic is to throw the flask over the heads of the first rank so the fire burns multiple ranks and forces them to disperse. 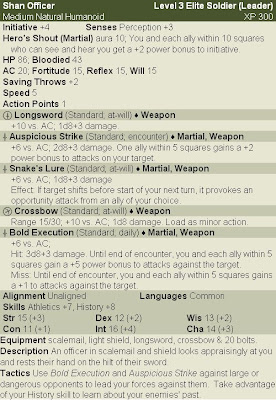 Shan Officer
About 10% of a Shan force are made up of officers; skilled warriors and capable scholars who have learned the tactics of their warlord ancestors and whose battleplans have been honed by hours of study of history. This effectiveness translates into battle; the officer is an exceptional individual who can be told apart from their warsmiter troops by the red plumes worn on the helmet and a scroll case containing tactical histories.

The officers are keen tacticians, their understanding of military history and past battles helps to inform them of current situations. The officer will make History checks to try and establish an advantage in battle but is also no slouch when it comes to the battlefield. Accompanied by a warsmiter in a battle chariot, the officer is often key in creating a situation where a weak point is found and exploited to the advantage of the troops. Their use of the bold execution maneouver can turn the tide of battle when facing a large or dangerous foe.
Posted by satyre at 09:00