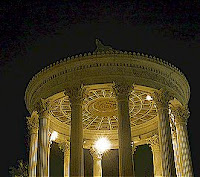 Enclosed in ancient walls and ruined towers eight miles round lies a decaying realm of beauty and splendour carved out the land by a warlord of legend. The bards say when the realm was founded, he became invincible in war and contested his brother's claim to the throne with such vigour his brother bowed before him at the warlord's crowning here. The truth is lost to stories and fables as now the land is beautiful but wild, it's stewards are lost yet bound to the place by addiction, longing and ritual, their descendents grow inhuman amid ruined statues, overgrown gardens and palaces conquered by creeping plants bearing sweet fruit and serpents with jewel-like scales and exquisite venoms.
The Dome of Pleasures
The Sunless Sea
(inspired by Samuel Coleridge's Kubla Khan and the WFRP/40K demon Slaanesh)
Posted by satyre at 10:00