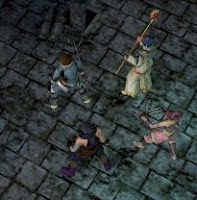 2009 appears to be the year of the mega-dungeon, with grognards and 4E fans running back to adventure in epic dark tunnels full of monsters, magic and mayhem. There are environmental concerns despite all that healthy Gygaxian naturism er, naturalism. With this, you may want to consider the following things about the physical environment of the dungeon. Denizens may also be aware of these environmental issues.
Elements
Other options