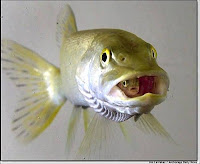 This concept involves running two plots arcs side by side. One plot is to have a major impact on the protagonist(s), the other to have a minor impact. Spider-Man fans will know entirely too well what this is. Spidey must fight the villain of the week while dealing with a domestic crisis involving either Aunt May or Mary Jane and there are numerous examples in other areas - it's just Spider-Man does it quintessentially.

Just as life isn't a single plot (usually), this provides a layer of versimilitude; as the audience/player has to deal with multiple issues so does the protagonist; and if you're dealing with multiple protagonists, this can leave you with multiple arcs threatening to go nowhere or completely out of the box. A little cable management may be required if you're dealing with a group of people - tying together plot arcs or setting them in sequence are valid solutions in many cases or you can end up with a tangled mess (Too many times I've been there, done that!) that confuses.

The big plot/little plot concept lets you compare the situations (How is a turbulent relationship like a sinking ship?) you've put the protagonist in so you can draw some parallels and even promote character growth - to quote Blaine from The X Files

"I didn't spend all those years playing D&D and not learn a little something about courage." So when you're in the lifeboat after having saved six people and learned how to take the initiative, when your overbearing partner kicks off you have every narrative right to tell them to STFU.

It can also allow you to contrast the situations - this can be done to inject comedy into a huge drama or as a dark reprise against the bright epic being told. As with any composition using opposites, care must be taken that one compliments the other, otherwise you just end up being accused of being random. This suggests that some plot hypotaxis needs to go on when using big plot/little plot in this manner, with the little plot playing subordinate to the big. Or if you like huge backdrops for your human dramas, vice versa.

Remember your primary intent and your narrative focus. If you suddenly veer off between plot arcs without any explanation, there may be a sense of being left hanging. In some cases (like in a cliffhanger) this is perfectly reasonable. In other cases, it may just get annoying (Heroes does this a lot because there are so many characters) and disjointed. If a character runs away with you on a little plot, keep notes and work out how to bring narrative focus back. Using cable ties is optional unless you're writing one of those stories.

Done well, big plot/little plot can provide hours of fun. Let me know if you've used this approach well or if you've got a lesson you learned the hard way.
Posted by satyre at 07:55