review: the red eye of azathoth 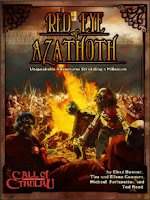 Metric: Brass spheres.  For reasons which will become apparent.  Not that this will help.  After all this is for Call of Cthulhu.  Survival is not a likely prospect.
DISCLAIMER: Review based on a PDF copy provided by Open Design.
Overall: 5 brass spheres (worth the wait and then some...)
A well-constructed Call of Cthulhu campaign is a joy to behold and this one is built to last.  Though the epic scale and lack of ready access to dynamite until the last scenario may discourage purists, the quality of this campaign shines through. The historic nature of the campaign makes it slightly different from the usual 1920's or modern-day cosmic horror.  With some truly awesome set-piece encounters and harrowing situations, Red Eye of Azathoth deserves a place in any discerning Keeper's collection.

Content: 5 brass spheres (a cornucopia of cosmic horrors and likely heroes)
This is a five-part campaign of reincarnating souls in pursuit of an ancient Chinese sorceror intent on becoming master of the world (with a little help) by way of binding Azathoth.  If that doesn't sell you on how insane cultists are, you've not been paying attention.  Pre-generated characters are provided for each scenario - suggestions for other options are available but these are plenty of fun; the last scenario in particular will have your players chuckling if they're Western fans.
The first scenario introduces a Viking raid on Lindisfarne where the stars are right.  Splitting the party between Norse raiders and monks allows for intra-party roleplaying, investigation and gory violence in a tight scenario brimming with Norse zombie lore and Mythos horror against an apocalyptic backdrop where troubling visions may be the least of your worries...
The second scenario leaps to Kamakuran Honshu, where early samurai discover the secrets behind a quietly prosperous village.  Buddhist reincarnation beliefs mixed with distinctive Japanese monsters and the uniquely horrific nature of Mythos magic reveals a scenario replete with treacherous bad guys and stunning visuals set in snowy mountain passes.
Then to Inquisition-era Valencia, where reincarnated Investigators await torture and worse.  Escaping the Inquisition dungeons will be the easy part.  The odds are stacked against the investigators here and players will need their wits about them to prevent a hideous ceremony.  If an enemy of their enemy can be trusted, will they be able to take advantage of such help?
The next step is Roanoke Island.  The arrival of more colonists may do more than strain relationships with the locals. Yet against this backdrop, a race against time between two former allies puts the newest incarnation of the Investigators between a rock and a hard place.  The roleplaying opportunities come thick and fast here.  The fate of the colony may be the least of your worries.
Finally in Arizona, there is another incarnation.  This has one of the best opening sequences I've seen in any scenario, let alone Call of Cthulhu.  The scenario is classic Western revenge piece.  Cannibalism features large here and using prior relationships with the townsfolk will make this one of the more memorable scenarios that players will experience.
The structure hangs together sufficiently well that events are not entirely dependent on precursors from previous scenarios but the influence of events may enable player agency or provide interesting complications.  The use of the Incarnum skill provides options for lore (including sorcery) making it a double-edged sword.  Sometimes it's possible to know a little too much.
Appendixes with player handouts, new monsters, new spells and other items of interest enable players and Keepers alike to get the best out of the scenario.  The handouts are good-quality and doubtless will inspire responses from players varying from grim chuckling at the Inquisition's handling of confession to wincing at reading some of the magician's manuscripts.

Art & Layout:5 brass spheres (gorgeously grim cover, helpfully organised, lots of fun).
The Malcolm McClinton cover shows berserk Vikings with orange eyes attacking Lindisfarne monks while Norse warriors look on in horror; conveying the mood of the first scenario and setting the tone for the other parts.  Interior art is a mixture of classic pieces.  Each scenario has it's own distinct design and this suits the product perfectly.  Maps and interior art are excellent and where possible keep the aesthetics of each scenario.  The layout and statblocks are helpfully organised with relevant appendices at the end of each scenario so you're not forced to search for long.

In conclusion, Red Eye delivers on it's promise.  It's been a long time coming but now it's here you can see why it's got it's Chaosium-licensed status.  Even if you played each scenario as a one-shot that's still five sessions of wonderful Cthulhu goodness.  The ability to roleplay and think laterally is essential in this scenario.  If your players are of the 'open door, kill monster, take treasure' attitude, this may not be the best option.  Yet those players may also relish the break in pace.  Diehard Cthulhu fans take note, this one is worth your attention.
Posted by satyre at 09:00