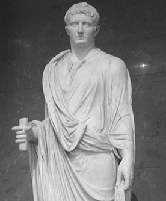 Inspired by comments on the post we built this city with wand and scroll.

Defender's Monument
This exquisite marble statue of a great paladin astride his destrier is surrounded by an invisible hymn of faith; his brandished sword burns with continual flame.  Those within 20' of the statue gain the benefit of an enhanced consecrate spell (+6 sacred bonus to positive channeled energy DCs, -2 penalties for undead in the area).  The statue counts as a shrine for the deity in question and often set over a municipal graveyard.
Creation: 9th-level, Create Wondrous Item, consecrate, continual flame, ghost sound, permanency, marble statue worth 2,500gp.
Market Value: 54,000gp

Sword Bridge
This narrow stone bridge (5' wide) arches over a 20' wide gap.  The bridge has hardness 8 and 30 hit points per 5' section and is breached in a single attack with a Strength check (DC24).  Three times a day, when a command word is spoken, the bridge sprouts stone spikes to impede movement as the spike stones spell for nine hours.  The spikes are a magical trap spotted only by those with a trapfinder class feature (Perception check DC29). These spikes reduce ground movement by half and inflict 1d8 piercing damage per 5' travelled on the bridge.  Those taking damage must make a Reflex save (DC23) or take injuries to their legs and feet, forcing them to move at half speed until they receive magical healing or someone takes 10 minutes to treat the injuries and make a successful Heal check (DC23).
Creation: 9th-level, Create Wondrous Item, spike stones, wall of stone.
Market Value: 51,000gp

Watchful Herald
This marble statue of a winged messenger (e.g. deva, devil, swanmay) serves as a herald commanding those present to "Make Way!" if a noble's coat of arms is visible within 150 feet.  When the watchful herald calls out, those within 20' of the herald are affected by calm emotions cast by a 10th-level caster (Will save DC22).  The herald was originally devised to prevent panic or rioting when liveried servants or nobles themselves used the street.
Creation: 10th-level, Create Wondrous Item, calm emotions, magic mouth, permanency, marble statue worth 5,000gp.
Market Value: 35,000gp
Posted by satyre at 23:55