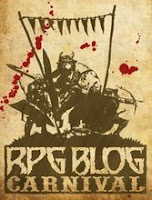 This month's RPG Blog Carnival (hosted by Nevermet Press) is about badass RPGs (which includes the Bad Ass RPG).  Bad ass is one of those "you'll know it when you see it" neologisms like va-va-voom defying simple classification.  So what makes something (even an RPG) bad ass?  Bad ass transcends a single value, it is a confluence of traits...
Bringing the bad ass to your game means being a little bit different, knowing what you need with laser sharp focus and always moving towards the end goal.  Some players take the drive to be exceptional as a mandate to munchkin.  The element of chance also plays a part, particularly in systems where ability is dependent on successful dice rolls.  Point-based or bennie mechanics can shift the odds in the player's favour. Mechanics that assume levels of competence and game masters who awesome up their players or judiciously give chances to shine can mitigate this need.