review: court of the shadow fey 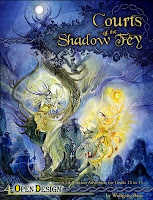 Metric: Eyes.  There's a lot to take in with this book. Plus they may be of significance.  You didn't hear that from me, the scathsidhe dislike tattletales.
DISCLAIMER:  Review is based on a PDF copy provided by Open Design.
Overall: 5 eyes. If you're a fan of the fey, like epic sweeping plots dealing with the fate of a city and leading up to the fate of foreign courts, powers and principalities Courts, have confident paragon characters of 12th - 15th level or want to see how 4th edition adventures could be, take a look.  It's been described as Amber meets Labyrinth and that's justified.  Add Pan's Labyrinth, The Dark Crystal and Dangerous Liaisons to taste.

Content: 5 eyes.  What starts out as a diplomatic incident in Zobeck opens the door to the world of the shadow fey whose ceremonies suit the challenge and ritual mechanics that 4th edition excels at.  Finding the shadow road to the Courts is a challenge in itself, especially in a city where the fey arbitrarily strike back at those breaking proclamations made solely in Elven.  Having a fey character in the party is very useful - not essential but it will help at certain points.  Getting to the Courts is another adventure in itself and once you're there, you may find the intrigues of the fey as dizzying as anything you'd find in Sigil.

The status rules for the Courts are relatively simple but spark roleplaying.  A bad night at the Courts may relegate you to licking your wounds and rubbing shoulders with goblin potboys.  A good night?  That's the stuff of legend - from seducing courtiers to duelling nobles along cliffsides to royal feasts. Stat blocks for new monsters, traps and skill challenges (as well as skill battles) give the player characters plenty to do.   From hunting the firebird to navigating court factions to discovering what ails the Moonlit King, the Courts are a world worth exploring.

There is a feast of new material, from the sinister empty cloak to the savage forest marauder to the beguiling pyrohypnosis brazier to the court dignitaries themselves who give any paragon a run for their money.  A lot of these things are easily transplanted to other games.  Rules for courtly gossip are golden (p.68) and Akyishigal and his roachlings are distinctive additions to your 4E game.  With some minor preparation, Courts of the Shadow Fey could become the basis for a 4E campaign with the presence of Akyishigal and the scathsidhe playing counterpoint to the eladrin, elves and drow.  Tailoring to fit your preferred setting is relatively simple.

Layout: 4 eyes. The layout is to Open Design's usual standard.  The artwork is beautiful, the cover by  Stephanie Law has an ethereal air to it and the interior art is complimentary.  Layout is excellently done and the text is clear despite minor quibbles with eclectic typeface and elaborate textures.  Statblocks and boxed text are clear and easy to follow despite this. Cartography is beautifully rendered and supports encounters (the firebird hunt on p79 is a good example of innovative mapping).

The question of how to do a good 4E adventure has been raised before. Courts of the Shadow Fey offers a packed-to-the-brim book of courtly adventure that is more than grinding out a few levels against ghouls, gnolls and other demons. It has plenty of crunch to sustain hardcore gamers as well as refined experiences to dazzle explorers.  Tips on pacing, encounter design and thinking behind motivation lurk ready to assist the DM, as well as downloadable handouts for the setting.  In the right hands, this will spawn a game talked about for years.
Posted by satyre at 09:00