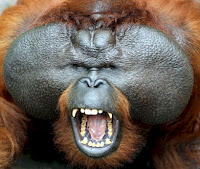 I've recently gained the raw awesome that is 3:16.  I was impressed by the ease that the mechanics simulated a war movie narrative and used character-driven events to steer action with the best flashback mechanics I've seen in any game.

There's a grey box on page 15 applicable to any tabletop RPG - the best guide on how to play I've seen since I've started playing.  Sublime.  If you have any doubts about it - go get it.


This got me thinking about the bar to entry games have in terms of complexity.  Wizards announced the release of Red Box in September at DDXP which looks to introduce D&D for new players - glad to see there is a provision for solo gaming for those times when you might be on the road or away from the Internet (it does happen!).  Intrigued there will be additional powers, options and monsters for established players too.

At the same time, Martial Power 2 was announced - I'm now less optimistic about the logistics of running games away from home.  So that's core rules, core rules volume 2s, power books (arcane, divine, martial, primal) as of February 2010.  Ten A4 hardback books.  Difficult for a messenger bag or knapsack to carry - I haven't tried a rucksack yet - I suspect it may be the only way to roll without luggage or packing crate.


I haven't counted equipment (Adventurer's Vaults), general setting  (Manual of the Planes, Underdark), or monster books (Open Grave, Draconomicons).  Packing crate to transport, let alone use in actual play.  Even using just one specific setting and avoiding the general setting/monster books, it's a lot of shelf space to carry.  I'm sure the players won't mind.  Maybe if I got a mule...?


And there's the upcoming releases: Power books volume 2s, core rules volume 3s, another power book (and if it's popular, it's volume 2), softbacks for each race.  This of course says nothing of your need for a laptop for any DDI-related activities. You might want your notes or a module as well and I've seen plenty of games where a box or lever arch file was used for those.

How long before some enterprising soul sells a pre-packaged D&D Bookshelf? Or someone has the bright idea of putting out the Core Rules (alone) on DVD in searchable format?  At this rate it may be the only way you can take your options with you.  Fortunately, Wizards also announced the D&D Rules Compendium.  A 300 page 9x6 reference manual to help steer us through the core rules.

With thanks to G. Dustin Snyder (@Wolfstar76) for saving me research time on Red Box.
Posted by satyre at 09:00