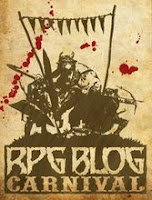 This month's RPG Blog Carnival post is about animals in RPGs hosted by Tower of the Archmage.  While many naive individuals claim animals are 'dumb brutes' or 'inferior to humans', that's a matter of opinion. Animal tactics have inspired humans for time immemorial and some species have had millions of years to develop them.  While some games treat animals as minor threats, the following tactics can be used in any system.

Run away to fight another day: Most animals do not blithely fight to the death, in some cases injury will inevitably mean starvation.  Some lairs like badger setts have multiple entrances/exits to enable escape.  Hit-and-run tactics employed by some predators weaken prey who could ordinarily resist them.

Setting traps: Spider webs are the archetype including orb-like structures or even trapdoors with tripwires that warn a spider something is outside.  Ant lions are another example, waiting at the bottom of a steep-sided sand pit that makes escape difficult.  Angler fish have naturally developed lures and jaws that close on reflex as the lure is contacted.

Safety in numbers: The ethos behind herds, packs and swarms alike, animals in this situation rarely fight fair if the numbers are in their favour.  Even in predator satiation, where you rely on the bodies of your peers to stop a predator eating you, there is a survival strategy.  Wolf pack tactics show sophistication often missing from party combat.

Tool Use: Crows go to Macguyver-like lengths to improvise tools and drop stones into a bowl of water to elevate the water level for a drink.  Chimpanzees created stone hammers 4,300 years ago, orangutans craft whistles to scare predators and gorillas use sticks to test water depth (an example of natural 10' pole use).  Even veined octopus use coconut shells for portable shelter.

These are just a handful of tactics commonly used.  So if your party isn't using them, does that make them dumber than beasts?  Enquiring minds...
Posted by satyre at 09:00