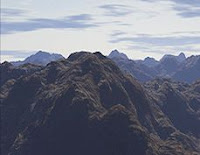 Another world for Dark Heresy.

Strine's World is an Earth-sized planet, designated as a Feral World by Imperial lexicographers and catalogued by Chartist Captain Marius Strine who has identified three continents as being of interest to the Imperium. The remaining islands have yet to be charted but appear to show no human life. Strine profitted in shipping warriors for uplifting as Imperial guardsmen in return for rudimentary technology and breeding Grox.

Mauger - This desert-like continent in the southern hemisphere has a violent and perverse indigenous population that form extended clans who war with each other riding in sand-rogues (two-person methane-fueled dune buggies fitted with wind sails); the rogue warriors are hardy, if primitive and value water and methane as well as their own reputations. These natives are often tattooed and scarred, never mentioning the dead in case they come back.

The other thing about Mauger is the native saurian carnosaur population who complicate the clan wars sometimes by eating the combatants. Short-haired Grox provide both human and carnosaur with meat and leather - Mauger hospitality involves feasts known as bar-bee where roasted Grox and reptile meat with watery yet refreshing rotgut booze are consumed in great quantities. The resulting tensions can start wars over an oasis or methane refinery.

Lekbar - An equatorial island continent with lush jungles and coastal civilisations, Strine found the locals enthusiastic traders yet some city-states have rulers with viziers as advisors to the ruler, some of whom are rogue psykers. Fortunately these city-states are perpetually at war with each other and if one becomes too ambitious, the others ally against it and those rogue psykers who can't hide their curse are usually executed by the fearful populace.

The Lekbari have extensive if basic medical and pharmaceutical skills; they routinely drink good-quality amasec and recaf and have access to obscura, stimm and a weak version of slaught (+2 to Agility/Perception bonus but only -10 penalty for 1d5 hours). The Lekbari are deadly fighters, virtually all assassins from Strine's World come from Lekbar and once uplifted their loyalty to the Emperor borders on the fanatical.

Isar - A northern polar continent, this was the crash site for a ship captured a few centuries ago by Orks; the resulting crater threw enough ash and dust into the air to set Strine's World back a few millenia and caused an ice-age across the entire northern hemisphere; signs of increased volcanic activity will resume glaciation which may reach as far as Lekbar. This creeping ice is heralded by dark clouds and increased rain.

Primitive cannibal mutants haunt the ice; travelling in packs to hunt each other and worship the long-haired Grox. These mutants are nightsiders, the glare from the sun and ice almost cripples them. Occasionally a mutant will walk during the day but it's gross appetites for flesh (including the sacred Grox) make them outcast and the 'daywalkers' are feared for their unnatural habits and outlandish violence against their neighbours.
Posted by satyre at 09:00