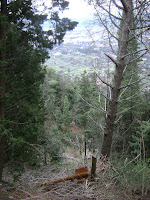 Verlore, one of many petty gods of the lost, watches over people, things or causes.  Tales of lost children now safe and shivering, of heroes misdirected and armies sent into peril.  All of these show his hand. The tomes of sages describe Verlore as "...an old man, forgettable of face, clad in ragged robes and road dust, approaching from any quarter, wielding a traveller's stave and shrouded in illimitable dread."  In his presence all but the strongest will feels uncertainty and a desire to be away.  This in itself has led to problems for in his wake, the people of a city may bustle into unfamiliar alleys and unexpected routes.
The Archincanabula notes how witches use cold iron and rowan to ward against him.  He is said to converse with treants and play blind-man's buff with dryads.  The last seems unlikely yet the princes of faerie honour Verlore as that rare thing, a fair and principled god.

Yet peculiar desperation leads petitioners to ask a god of the lost for directions.  Petitioning Verlore is to court uncertainty, he is always irritated by such requests unless the petitioner is particularly charming, female or both.  The unseemly, foul and unfortunate find themselves far off the mark.  Where Verlore's wrath is incurred, the petitioner may vanish  to appear somewhere they have never been and seemingly far from what they know.  While he rarely tolerates confrontation he has banished arrogant souls to The Eternal Maze or brought them to distant places only to vanish before them.  Landmarks vanish and symbols of despair are etched into roadsigns in his wrath.

For this reason, he is placated rather than worshipped.  Travellers leave him offerings, an extra meal or pair of shoes by a broken milestone.  Sailors ward against him by casting offerings over the side.  In some ports, old beggars with staves are driven from the quays for fear of lost wealth.  If there are clerics of Verlore, they are pitiful creatures, plagued by missed appointments and missing items.  To wander aimlessly is to be 'touched by Verlore' - something most adventurers keenly wish to avoid.
Posted by satyre at 09:00